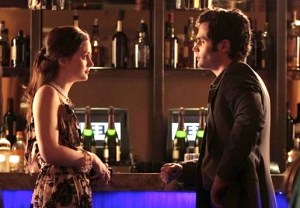 The CW’s Gossip Girl resumes its fourth season on Monday, April 18, with the first of five all-new episodes, and whether you’re Team Chair, Dair, or Who Cares?!, showrunners Stephanie Savage and Josh Safran tell TVLine that fans will not want to miss how the cycle ends. END_OF_DOCUMENT_TOKEN_TO_BE_REPLACED