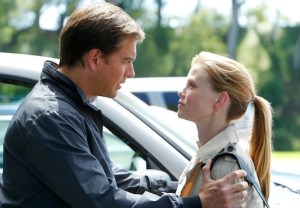 In the season premiere of CBS’ NCIS (airing Tuesday, Sept. 20, at 8/7c), Tony appears to have set his sights anew on EJ Barrett — just as someone else sets their gun sights on them. And TVLine has a pair of exclusive photos from the couple’s, um, intense reunion. END_OF_DOCUMENT_TOKEN_TO_BE_REPLACED 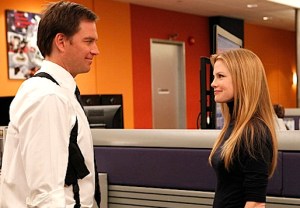 Say what you will, “Tiva” fans, but NCIS newcomer E.J. Barrett (played by Sarah Jane Morris) is a Special Agent to be reckoned with, whether she’s butting heads with “the Great White” or asking DiNozzo to hand her a towel. E.J.’s chilly welcome won’t be warmed up much this Tuesday (at 8/7c, CBS), when her own team of agents makes camp in Gibbs’ squad room, to help out with the Port-to-Port Killer case.

Morris spoke with TVLine about E.J.’s unexpected designs on DiNozzo, why Ziva won’t ever spook the new gal, and how the P2P storyline promises to be rife with danger. END_OF_DOCUMENT_TOKEN_TO_BE_REPLACED 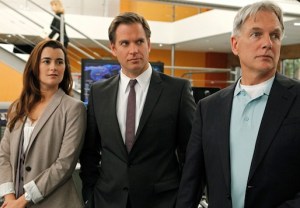 If looks could kill… well, NCIS might not need the upcoming Port-to-Port serial killer storyline, based on these photos we’ve got of Gibbs, DiNozzo and Ziva staring down the “new team” moving into their squad room. END_OF_DOCUMENT_TOKEN_TO_BE_REPLACED 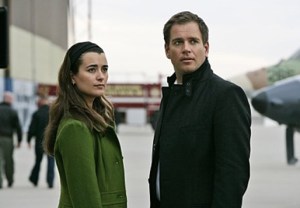 Fans of CBS’ NCIS (Tuesdays at 8/7c) and its perennially teased Tony/Ziva coupling may want to look away, because TVLine has an exclusive first look at the latest wrench in the works. And this wrench happens to blonde and beautiful. END_OF_DOCUMENT_TOKEN_TO_BE_REPLACED