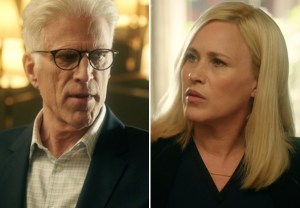 CSI worlds collide once again this Sunday (CBS, 10/9c) when Ted Danson’s D.B. Russell joins the cast of CSI: Cyber, and TVLine has an exclusive first look at his reunion with Patricia Arquette’s Avery Ryan. END_OF_DOCUMENT_TOKEN_TO_BE_REPLACED

Inside CSI: NY's Nearly-Silent Artist-ic Episode, What It Means for Flack, Mac and the Messers 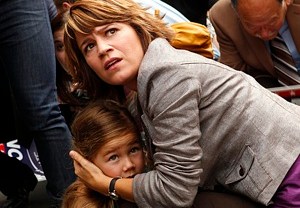 Tonight’s installment of CSI: NY (CBS, 9/8c) will reveal a whole new side to the long-running procedural: a silent one.

Written by executive producer Pam Veasey, the impactful hour — an homage of sorts to 2012 Oscar fave The Artist — explores the aftermath of a shooting at a political rally that leaves Lindsay badly injured. The first half of the investigation, however, is sans dialogue, and is instead narrated seamlessly by END_OF_DOCUMENT_TOKEN_TO_BE_REPLACED

TVLine Items: Is Bette Midler Glee-Bound? Plus: Raising Hope Goes Back to the Future and More! 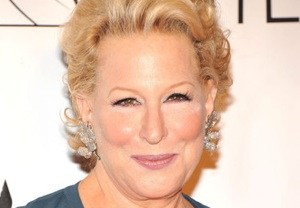 The Divine Miss M may soon grace Glee with her presence.

Ryan Murphy took to Twitter Monday night to announce that while at the God’s Love We Deliver Golden Heart Awards ceremony that same evening, he “asked the incredible Bette Midler to be on Glee in front of 1,000 people.” Her response? END_OF_DOCUMENT_TOKEN_TO_BE_REPLACED 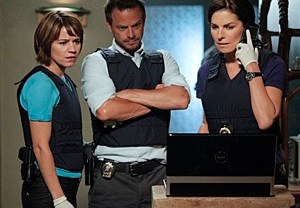 Perpetually on the bubble, CBS’ CSI: NY was blessed earlier this year with an unexpected ninth season, which launches tonight at 8/7c. Given the 11th hour reprieve, it would have been entirely understandable for executive producers Pam Veasey and Zach Reiter to approach this season as the long-running procedural’s last — but is it? Perhaps not, say the showrunners. END_OF_DOCUMENT_TOKEN_TO_BE_REPLACED