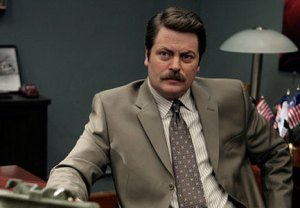 When Parks and Recreation introduced us to Ron’s ex, Tammy 2 (Megan Mullally), we were scared. Or so we thought. Now that the NBC hitcom’s season finale has suggested that we’re about to meet her predecessor, Tammy 1, we know the true meaning of fear. What we don’t know is who’s gonna play the queen of mean. A few suggestions: END_OF_DOCUMENT_TOKEN_TO_BE_REPLACED

PaleyFest '11: Eight Surprising Spoilers From the Parks and Recreation Panel 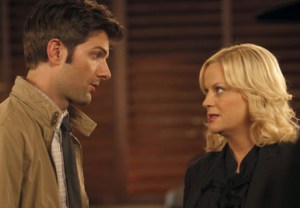 It was Parks and Recreation‘s turn to take the PaleyFest stage Wednesday night and, as expected, it was filled with lots of laughs, scoop and even some Ron Swanson sexual innuendo.

Our very own Michael Ausiello was on hand to moderate the festivities and he got to the bottom of eight spoilery Pawnee plot-points — plus the real deal with all that Rob Lowe/Charlie Sheen talk. END_OF_DOCUMENT_TOKEN_TO_BE_REPLACED