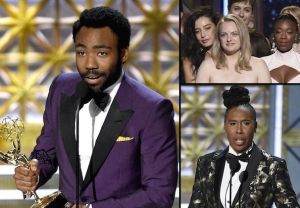 While every Emmy win is noteworthy, several this year were downright historical.

Take Atlanta auteur Donald Glover, who early in Sunday night’s ceremony became the first black person to win an Emmy for directing for a comedy. Ever. END_OF_DOCUMENT_TOKEN_TO_BE_REPLACED