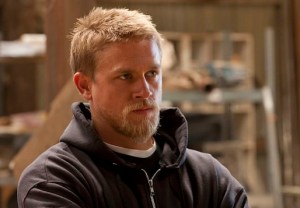 Sons of Anarchy‘s much-anticipated fifth season is still (way too many) months away. But with the never-ending flow of casting news surging through the Interwebs in recent weeks, we couldn’t resist prodding star Charlie Hunnam for some scoop.

Having only just begun production on the FX biker drama’s latest outing, Hunnam’s still relatively in the dark about the season as a whole. He does, however, have a good idea about END_OF_DOCUMENT_TOKEN_TO_BE_REPLACED

Eye on Emmy: Sons of Anarchy's Charlie Hunnam on Jax's Evolution and His Real Stance on Awards 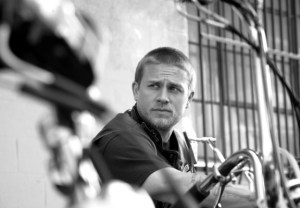 It’s tough making a gun-running, drug-dealing, murdering motorcycle gang member someone you want to root for. But Charlie Hunnam’s done it with ease over the past four seasons of Sons of Anarchy, FX’s Hamlet-inspired slice of gritty Americana. This could be the year that the 32-year-old Brit — whose resume includes big-screen Oscar contenders like Cold Mountain and small screen critical darlings like Undeclared – receives recognition for his brilliant turn as Jax Teller, the series’ tortured prince of Charming. END_OF_DOCUMENT_TOKEN_TO_BE_REPLACED 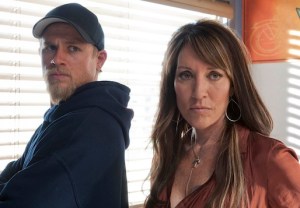 [The following contains major spoilers from this Tuesday’s episode of FX’s Sons of Anarchy. If you have yet to lay witness to it all, turn back now.]

If you thought FX’s Sons of Anarchy came in hot this Tuesday night and let loose with a bevy of dark twists, series creator Kurt Sutter needs you to know this END_OF_DOCUMENT_TOKEN_TO_BE_REPLACED 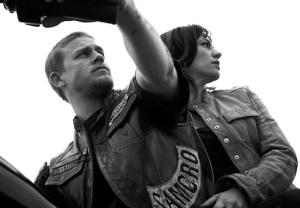 The incarcerated SAMCRO brothers are free again come Tuesday at 10/9c, when FX’s Sons of Anarchy revs up its fourth cycle. What awaits them is a club that idled in their absence, and now is poised to go full-throttle as part of a high-caliber gun-running network.

“Everyone comes out feeling like they have a handle on things,” series boss Kurt Sutter tells TVLine. “And of course that handle loosens fairly quickly.” END_OF_DOCUMENT_TOKEN_TO_BE_REPLACED