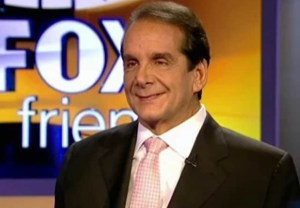 Dr. Charles Krauthammer, a Pulitzer Prize-winning Washington Post columnist and longtime Fox News contributor, died on Thursday after battling cancer of the small intestine, the newspaper reports. He was 68. END_OF_DOCUMENT_TOKEN_TO_BE_REPLACED

Charles Krauthammer, Longtime Fox News Contributor, Reveals: 'I Have Only a Few Weeks Left to Live'

The Washington Post on Friday published a statement from conservative commentator Dr. Charles Krauthammer in which he regretfully announces that his cancer has returned. END_OF_DOCUMENT_TOKEN_TO_BE_REPLACED