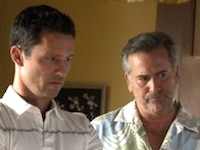 USA has given a formal green light to the Burn Notice movie prequel starring Bruce Campbell and to be directed by Burn Notice star Jeffrey Donovan. The two will also executive produce with Burn Notice creator Matt Nix, who wrote the movie, and the series exec producer Mikkel Bondesen.

The untitled two-hour film, which was announced at this year’s Comic-Con, will begin END_OF_DOCUMENT_TOKEN_TO_BE_REPLACED