“I’m allowed to be a little sad.” Toward the end of the series finale of The Walking Dead, as Carol said goodbye to Daryl, she couldn’t hold back the tears — not all of them, anyway. He was heading out on a very personal mission (more on that later), and his BFF was staying behind in a new role (more on that later, too). 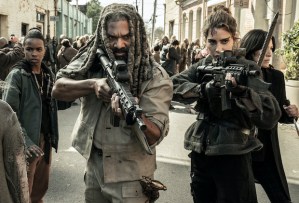 And us? We were left a little sad, too. After 11 seasons of blood, sweat and fears, we had probably seen the tag team together with Maggie and Aaron, Gabriel and Rosita, and the whole gang for the last time. Heck, we definitely had seen at least one of the aforementioned characters for the last time (more on that… Oh, by now you know the drill!).

Along the way, we learned whether or not Judith joined mom Lori in the afterlife, saw the Commonwealth’s vile governor get served her just desserts, watched one couple reunite and found out exactly where another, inarguably more prominent one stood.

And now, at last, it is “later.” So keep scrolling, and we’ll go over all of the major developments in “Rest in Peace,” from beginning to the ultimate end.