No TV series is completely safe from an occasional eye-roll or two. Whether attempting to dig out of a narrative hole or struggling to make a character relevant, sometimes even our favorite shows can take an unexpected — and ultimately unwanted — detour for the worse.

Yes, we all remember Arthur Fonzarelli and his nail-biting leap over a Los Angeles shark whilst on waterskis (and in a leather jacket). Nor have we forgotten the Moldavian Massacre. Or Bobby Ewing’s timey-wimey shower. Or, ugh, Coy and Vance Duke. TVLine, though, is not here to regurgitate such time-dishonored chestnuts! Instead, our purpose here is to revisit fresher storyline fumbles — specifically, those from the current century.

Worst TV Plot Twists of the Century (So Far) 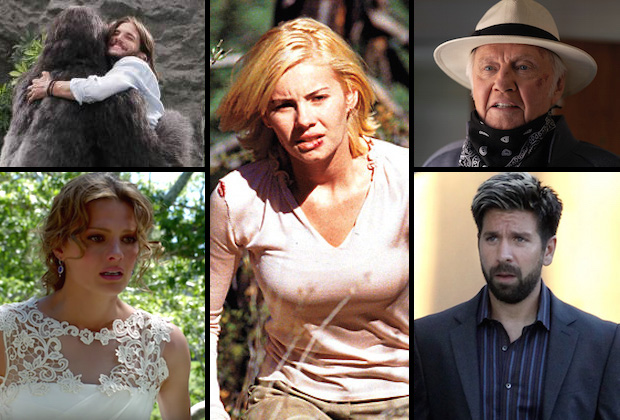 A word of warning: Some of the plot twists we tallied here were so terrible, we wish a bout of amnesia could delete them from our minds. Remember when 24 sent Jack Bauer’s daughter, Kim, into the woods for a confrontation with a cougar? (We guess that seemed like a good idea at the time…?) And shockingly enough, not one, but two gorillas made the cut! (Maybe W.C. Fields was right?)

But that’s not all! Castle, Chuck, Once Upon a Time, Nashville, Revenge and several other otherwise-regarded series also made the list for their infamous narrative misfires. Review TVLine’s picks in the gallery above (click here for direct access) and then tell us which plots had your head spinning, in the Comments below.