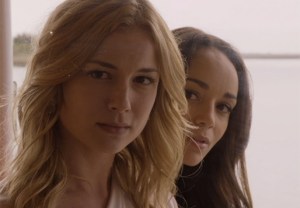 Before we bid adieu to Emily Thorne — or whatever she’s calling herself these days — and the entire Hamptons crew, TVLine is looking back at the fateful hour that started it all, and we’re toasting with a tall glass of hindsight.

After everything that’s happened during the past four seasons, it’s hard to believe that the world of the pilot even existed, one in which Nolan was more geek than chic, in which Emily expressed genuine feelings for Daniel and in which Victoria had yet to fake her death (twice).

Browse our gallery of must-discuss moments from the pilot below — extra points for anyone who can pin-point Declan’s accent — then drop a comment with your fondest memories of seasons past: When do you think Revenge was at its finest?