SEASON 4
ABC moves its struggling spy drama from Sundays at 9/8c to Wednesdays at 9, following Lost. Sydney & Co. join a black ops division of the CIA called Authorized Personnel Only — run by Sloane — in the season premiere; the rest of the season unfolds in a manner both sublime (Sydney and Vaughn get engaged) and sometimes silly (Arvin Clone).

GARNER | One day, I found myself as a vampire. And I thought, why am I a vampire? Where has the mythology taken us? How have we come to this? [Laughs]

GARBER | I was on board with anything. Except, yeah, I think we had vampires one episode and thought we had jumped the shark then. 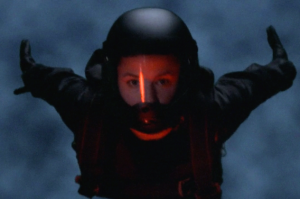 VARTAN | Victor and I joked about it… There was a scene where we jump over a Russian city, and there’s a huge red ball hovering over us. We looked at each other and said, “Dude, we didn’t jump the red ball. We just jumped the shark.” [Laughs]

GARBER | But then what happened was, the show, like most shows, it goes in peaks and valleys, and it came back strongly.

NEMEC | The best days in that writing room was when J.J. did come in. I mean, even if he blew something up beyond comprehension, and three weeks’ worth of work went into the toilet, the spirit of J.J. always prevailed over that show, and there was always an effort. It’s part of what you do on a writing staff, which is to capture the spirit of the creation of that show. So even in the days when J.J. wasn’t there, J.J. was there. We never lived in a landscape of trying to figure out how to please J.J. “How do we come up with something that J.J. won’t blow up?” It was never about that.

In season finale cliffhanger, Vaughn and Sydney’s car was involved in a terrible wreck… right after he told her “For starters, my name is not Michael Vaughn.”

VARTAN | I didn’t know I was coming back at the time. I didn’t even know that my death was going to be faked for a while, to be honest with you. I don’t know if J.J. withheld that information on purpose. If he did, that was very shrewd and clever of him. 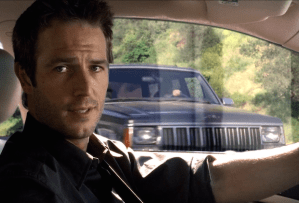 APPELBAUM | We’re all sitting in the writer’s room and the door comes open. It’s Jen standing there with the script and she’s like, “Seriously guys? ‘My name is not Michael Vaughn?!’ What are you talking about?” And we’re like, surprise! Because nobody had prepped her for it.

VARTAN | That accident was pretty violent. I remember seeing the dailies and I was like, “Holy s—t, how did they do that?” That was really intense. It was really jarring.

OLIN | I think honestly what happened was in the fourth year at some point, part of the evolution was as much as all the personal stories and stuff were such a unique underpinning and character-y, the problem was that that stuff, you know, the Felicity stuff, being with [Syd’s] friends and the whole thing, it couldn’t really compete energy-wise. That didn’t get really figured out.

I think it got harder to sustain those things, and I don’t know that everybody was putting in as much effort to balance those things, and then once it became all about the gimmicks and the plot twists, you begin to feel like, OK, everybody’s running out of steam here.

PROCEED TO NEXT PAGE FOR THE FINAL SEASON: “WITHOUT JEN, THERE’S NO ALIAS.”