It was the blast that knocked the Upper East Side off its Christian Louboutin stilettos. As promised, Gossip Girl unmasked its namesake blogger in the show’s series finale Monday night — and the elusive scoopmonger was…

But that’s wasn’t the only surprise in the final hour of the CW soap.

WEDDING BELLS AND CUFFS | Chuck and Blair flee the scene of Bart’s death in the trunk of a limo – seriously, you’re not going to pop that thing, NYC cops? – with Georgina’s help. But it’s Jack Bass who really comes to rescue with a plan: Chuck and Blair should get hitched so she can’t incriminate him. Chuck is against the idea; this isn’t the way he wanted to marry her.

“Why not?” protests Blair. “We’re in love. And one way or another, we achieved our goals.” Plus, she adds, it’s exciting — not dull like hand-holding and going to the movies.

“I was a stupid child when I said those things,” Chuck replies. “Life with you could never be boring.”

With some help from their family and friends, the two eschew a courthouse wedding to throw an impromptu ceremony on the streets of New York. And they just barely manage to get away with it before a tip from some over-eager teens brings the police to the site. But the cops don’t have any evidence, and since Blair’s the only one who saw anything, they’re forced to let them go.

GOSSIP GIRL REVEALED | Serena abandons her flight to L.A. after reading Dan’s glowing, unpublished chapter about her. He insists that he meant every word, but she wants to know, “Which one is the real you?” Well, that’s a complicated question, S, because your on- and off-boyfriend has been hiding his real self! Blair still doesn’t believe her friend is going to end up with poor Humphrey and that his American dream of rising up “has died.” Dan overhears their conversation and releases his final chapter all about the blogger to publish on The Spectator. As the words hit the Upper East Side gang (and beyond to Vanessa, Juliet, Rachel Bilson, Kristen Bell, New York Mayor Bloomberg (?!) etc.), they realize the blogger has been among them all along.

“If I wasn’t born into this world, maybe I could write myself into it,” Dan explains. And so he started the blog, mimicking the voices of the UES’ chatty Cathys and using Serena as his muse “to create a legend.” (Apparently, Jenny knew about it for a while, and he kept out anything she didn’t want on there. But she herself sent in the tip about losing her virginity so she could get out of New York.)

Blair’s not too pleased about this news after all the hell Gossip Girl has caused her – “This whole time, I had more power than you,” Dan points out – but Serena is surprisingly OK with it. She calls it a love letter to all of them. “He made me realize I don’t want to run away,” she continues. “You guys are my family, and I belong here.”

And with that, Gossip Girl is dead and everyone can finally grow up. Or can they?

HAPPILY EVER AFTER | Flash forward to Dan and Serena’s wedding five years later. Chuck and Blair now have a 5-year-old named Henry. The Spectator’s taken off, and Nate is rumored to be running for mayor. The wedding party also includes the returns of Eric and Jenny and their odd pairings: Georgina and Jack, Lily and William (he was just using Ivy to get his ex-wife back) and Rufus and… Lisa Loeb?! Meanwhile, on the streets of New York, a new outsider walks among the trust-fund babies as Kristen Bell’s voiceover warns, “You may be rid of Dan Humphrey, but you’ll never be rid of me. There will always be someone on the outside wanting to get in. Who am I now? That’s one secret I’ll never tell.”

AND EVERYTHING ELSE | The line of the night has to go to William dubbing Ivy’s story as a Lifetime movie called Nobody Gives a Damn. And how about that flashback showcasing the first time Dan and Serena talked at a birthday party? It looked like it could have been lifted from an old DVD! Finally, did the use of “You Got the Love” remind anyone else of the Sex and the City series finale?

What did you think of Gossip Girl‘s swan song? Review the episode’s top nine OMG! moments in the gallery below, grade the series finale and then share your snappy judgements in the comments. 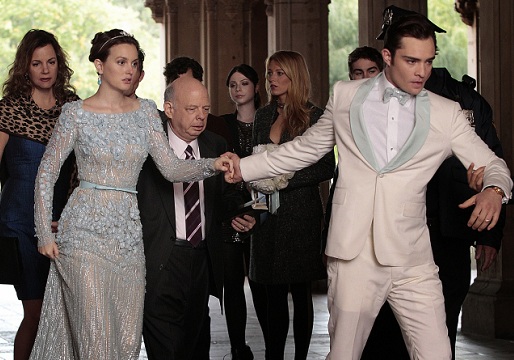