This most-unwonderful, cancellation time of year gets us thinking about the genre of TV shows that most often is given short shrift — sci-fi (or science fiction, if you’re being fancy)

The Nathan Fillion-captained Firefly, as the premiere example, lasted but 14 episodes on Fox, and yet it lands high on list after list of Gone Too Soon TV shows. What other short-lived sci-fi fare ranks up there alongside Captain Tightpants, in that they made a big impression during their own one-and-done runs? 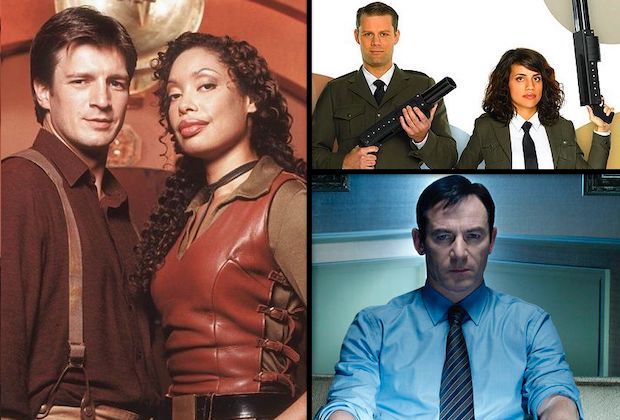 In the attached photo gallery (click here for direct access), Team TVLine has rounded up and ranked the 10 best sci-fi shows that only saw the light of day for a single season. Guided by the tenet that the elements of science fiction include time travel, teleportation, mind control, aliens, mutants, space travel, parallel universes, fictional worlds, alt histories, speculative technology and/or superintelligent computers and robots, our list highlights a mind-bending NBC drama that too many slept on, one Battlestar Galactica offshoot, The X-Files‘ spooky sire and more.

Plus, wherever possible (and done legally), we have noted where you can stream or rent/purchase these well-remembered sci-fi series, in case your quarantine binge plans could use an out-of-this-world boost.

Review our list, then chime in Comments with the sci-fi shows which got spiked after one season that still sting you, or add some suggestions of your own! (Any Dark Skies, OG Flash or Brisco County, Jr. fans out there…?)