If you aren’t already terrified of social media, one viewing of The Feed will likely swipe you over the edge. Based on Nick Clark Windo’s 2018 novel of the same name, this Amazon drama follows the family of Lawrence Hatfield, the creator of a technology that “enables people to share information, emotions and memories instantly.”

But like so many well-intended creations, The Feed isn’t immune to missteps. “When things go wrong and users become murderous, the Hatfield family is driven apart as they struggle to control the monster they have unleashed,” per the series’ official synopsis.

The Feed’s cast includes David Thewlis (Fargo) and Michelle Fairley (Game of Thrones) as Lawrence and Meredith Hatfield, who oversee operations on The Feed; Guy Burnet (Counterpart) as Tom Hatfield, their Feed-skeptic son; and Nina Toussaint-White (Bodyguard) as Tom’s wife Kate, who becomes pregnant with their first child.

TVLine spoke with executive producer Channing Powell about the real-world implications of The Feed, as well as what viewers can expect from the twisted technological tale, which is now streaming.

1. It’s a story of humanity vs. technology | “I was worried that the technology aspect might be a little alienating, so we were really concerned about bringing these characters forward and making their relationships as interesting and deep as possible,” Powell explains. “We wanted to ground all of the technology with human emotion as much as possible.”

2. It’s a cautionary tale | “We’re not too far off from this technology,” Powell notes. “Elon Musk is working on a neurolacing, Facebook is allegedly working on something that you implant in the brain and we’re already putting little chips in our wrist. On the chart of evolution, the next character is a robot combined with a human. Technology is so quickly evolving that we can’t seem to catch up with it. We have no government regulations, really, in place to control it. So that’s always been a fear in the back of my mind.”

3. It’s also a relatable story | How you feel about the pervasiveness of social media will likely determine which characters you relate to on The Feed. “I don’t think I would ever be willing to put something in my brain,” Powell admits. “I remember when this was first starting, I thought, ‘This could never happen. No one would ever put something like this inside their body. Our bodies are our final frontier of privacy. Letting someone have access to my thoughts would be crazy. But then I asked a friend of mine who was a little younger and a little more interested in technology, and he was like, ‘I definitely think people would do this. Absolutely.’ Some of the characters in our show see The Feed and they think of it like the coolest new iPhone. They don’t really think about it.” 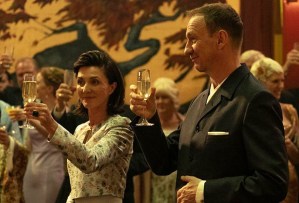 4. It features Michelle Fairley | “I was a huge Game of Thrones and Lady Stark fan, so when [Fairley] came up as someone who could possibly play Meredith, there was no question that it was her,” Powell says. And although present-day London may be a far cry from Westeros, Fairley is still facing her share of difficult family dynamics. “Meredith is a very driven woman who struggles with separating herself from her job as CEO and her job as a mother. She initially believes in The Feed, thinking it was something that could help her connect with her children — and it doesn’t end up doing that.”

5. It’s not what you expect | “Some of the characters that you will come to love are not who they appear to be,” Powell teases. “They will change in ways you won’t anticipate. The infection, or whatever we’re calling it, will spread to some of our beloved main characters. We’ll definitely see Tom and Lauren get into it more, and new family drama will surface in a surprising way.”