On Tuesday’s New Amsterdam, Max made a decision about what — or whom — he truly wants. And to get to that revelation, he took several of his coworkers on a traumatizing mountain trek.

When the episode begins, Max still hasn’t heard from Helen after seeing her on TV, and he explains to Floyd that he can’t open that door after trying so hard to get over her. Instead, he apologizes to Elizabeth for his reaction. Seeing Helen was like seeing a ghost because she’s not in his life anymore, he explains. Elizabeth seems to appreciate his apology, but she also insists that she won’t be part of someone else’s romantic drama. Then, just after Max asks for a do-over, he gets a text from Helen, asking if she can see him tonight.

But Max would rather avoid Helen, so he jumps on the opportunity to take over a patient’s Great Escape trip, and somehow finds doctors to cover for Elizabeth and Lauren at the last minute so they can tag along. (Iggy, who’s struggling to sign his divorce papers, also jumps at the opportunity to avoid reality.)

According to their Great Escape guide, rappelling off a 300-foot cliff reveals what one truly wants, so maybe that will clear Max’s mind? Well, maybe it would have if their guide hadn’t plummeted several feet, been trapped under rocks, and had her leg cut off and cauterized! (If this isn’t an advertisement against being outdoorsy, I don’t know what is.) In the midst of trying to save the guide’s life, Max shares with Lauren that for months after Helen left, he dreamt of seeing her again and getting the chance to ask her why she left him. Lauren believes he’s doing the right thing by not meeting up with Helen and that whatever she has to say isn’t going to help Max. She urges him to look forward, not backwards. 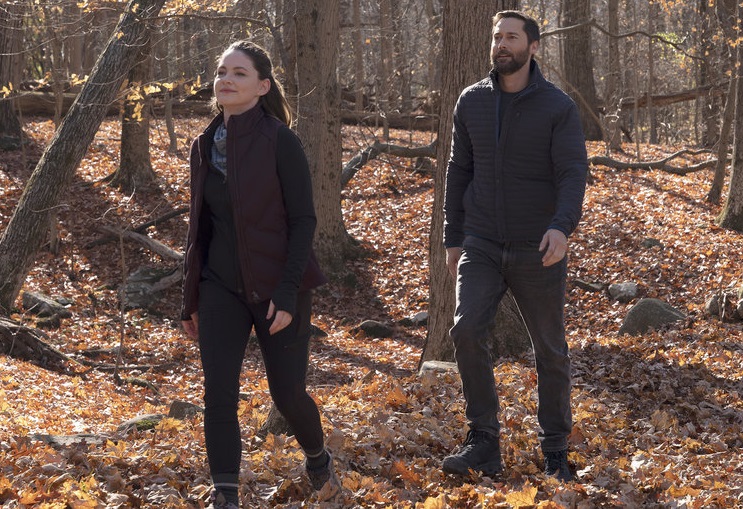 Eventually, Max shows Elizabeth the texts from Helen. He says he’s not going, but Elizabeth replies that he needs to look at Helen and decide what he really wants. “You can’t run forever. At least not with me,” Elizabeth adds.

So after they’re rescued from nature’s nightmare, Max stares at Helen through the window of the bar for a long moment, but he doesn’t go inside. Instead, he shows up at Elizabeth’s door and kisses her.

New Amsterdam fans, what did you think of Max’s choice? Do you think he needed to talk to Helen to get closure? Hit the comments with your thoughts!