Kindred is finally here — all eight episodes are now streaming on Hulu — and it marks the first on-screen adaptation of Octavia E. Butler’s celebrated sci-fi novel.

The series began in medias res, with Dana (played by WeCrashed’s Mallori Johnson) returning from her latest jump through time and immediately soaking in a bath to soothe her sore, severely whipped back. That’s a big deviation from the book, in which we first met Dana at the hospital recovering from her final jump — which left a permanent mark — and with police questioning whether she was being abused by her husband Kevin.

For TV Dana, there wasn’t much time for rest as police showed up at her door, at the behest of a concerned (and nosy) neighbor. She then fired off an email to her aunt Denise, urging her to “please hurry,” and the sounds of cops banging on the door bled into the opening title. 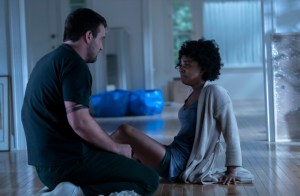 In the adaptation for Hulu, Dana is single, an aspiring TV soap writer, and new to Los Angeles after selling the brownstone she inherited from her grandmother in Brooklyn. Her aunt Denise and uncle Alan weren’t pleased to learn that she sold the family home and then purchased a new house without even viewing it in person first — especially since she doesn’t have a job.

It was at a restaurant that she met Kevin (The Right Stuff’s Micah Stock), a waiter who offered a ride home. Later that night, Dana made her first jump to the past, saving an infant Rufus Weylin from suffocating on his stomach. There, she ran into his mother Margaret (GLOW’s Gayle Rankin), and her own mother Olivia (Sheria Irving), who she believed was dead in the present. Olivia’s terrified scream sparked an overwhelming fear that sent Dana back to the present.

Dana has mostly been on her own, we learn, and an argument with Denise reveals long-standing family tension. After hitting up Kevin, the pair spent the day getting to know each other and buying a mattress for Dana’s new home. That led to them hooking up and later, Dana returning to the past to save Rufus, now a young boy, from drowning. Margaret’s frantic yells and then her husband Thomas (True Blood’s Ryan Kwanten) pointing a gun in Dana’s face sent her back to the present, screaming. That alerted her neighbors, who dropped by to check in on her and left unconvinced by Kevin that it was just a nightmare.

Dana opened up to Kevin about the jumps, wondering if she had been sleepwalking. Kevin’s bad joke about her having money turned into an argument, and Dana was soon dragged back to the past — this time with someone, Kevin, witnessing her disappearance. 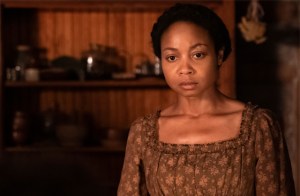 Rufus was a few years older and in danger after setting some curtains on fire. She carried him outside, demanding to know why the startled child kept calling her. That’s when we learned that Rufus remembered her rescuing him before, and he begged her to stay with him as an angry Thomas approached. But Dana ran… right into Luke, an enslaved man who directed her to the Hagar’s house on the edge of the plantation, where Olivia resided as a free woman.

The mother-daughter reunion revealed that they both began time-traveling at age 26, and were unsure of what sparked it. Olivia had been stuck in the year 1815 for about 12 years, presumed dead from the same car accident that killed Dana’s father. Before we could learn more, they were interrupted by the screams of a woman being manhandled by a man referred to as “Mr. Daniel.” He chased Dana into the woods and attempted to sexually assault her, but she was rescued by Olivia.

Still believing she was in the past, Dana found herself in the present with Kevin hovering over her. That’s when it hit her: She hadn’t been sleepwalking. This was real, and her mother was still alive.

What did you think of Kindred’s series premiere? Grade the episode below, and then let us know your thoughts in the comments.