If you’ve watched The Handmaid’s Tale since the start and STILL let yourself get hopeful about Hannah’s planned reunion with her parents in this week’s episode, a) you’re in good company, and b) we really should’ve known better, shouldn’t we?

At least the tension-filled hour plays out potentially well for one person: Serena Joy Waterford, who takes advantage of an exit door and a sympathetic nanny and makes a break for freedom.

Read on for the highlights of the Bradley Whitford-directed “Allegiance.” (And click here for our chat with Whitford about this week’s episode.)

OPERATION: GET HANNAH | Ahead of the rescue mission, Mark Tuello escorts June and Luke into an airplane hangar and briefs them on what will happen. Hannah is at a school in Colorado Springs, Colo.; that evening, three aircraft will fly into Gilead, literally under the radar, and paratroopers will drop in and recover the girl. “They’ll kill anyone who gets in their way,” Tuello assures June and Luke, just before he introduces them to the commander leading the mission. June quietly advises him that the girls will be terrified, and he promises her that he understands: He has a young daughter, a well. “My plan is to bring your daughter home, and go home to mine,” he says with confidence. Though families usually aren’t allowed to watch the mission’s live feed, June demands that Tuello let her and Luke stay in the control room as everything plays out, as a thank-you for providing the intel that made the move possible. He relents.

Just before everything gets put in motion, we get a glimpse of Hannah and her fellow students at Wife School getting ready for bed. When she’s sure the Aunt in charge of them isn’t looking, Hannah pulls out a picture book; it looks like she’s drawn on the back pages. Surreptitiously, she signs her name in all capital letters — I’m guessing because that’s all she learned before she was kidnapped into Gilead, where women are forbidden to read or write. Aw, Banana! June would be so proud! 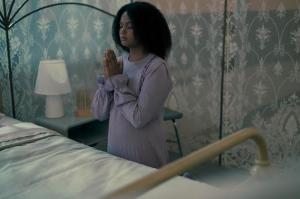 Unfortunately, that’s the last bit of joy for a while. Back at the base, as June and Luke watch, the plane icons on the map suddenly go red and stop transmitting information. Hannah’s folks are hustled into the hallway, where a crushed Tuello later finds them to tell them that the girls are safe, albeit still at the school, and the intel was wrong: Gilead anticipated the mission and took down all three planes as soon as they crossed the border, and there were no survivors. June and Luke are gutted.

‘ELEANOR HATED YOU’ | The next morning June uses the burner to call Commander Lawrence, who apologizes but reasons that the attack was warranted, because “they invaded my country.” He once more dangles New Bethlehem but adds that he’s going to need her to go public and say that the mission was a “foolish act of aggression” on the United States’ part. She angrily refuses. “I cannot make Gilead look like the victim here, Joseph. It is an evil f-king country!” she cries. He says he’s trying to fix it from the inside, and that he’s doing what he can to honor a promise to his dead wife. And that? Pushes our June right outta her mind.

“Eleanor HATED you,” she growls into the phone. “She couldn’t stand the sight of you.” After putting a fine point on how ashamed of Joseph the late Mrs. Lawrence was, June makes sure Joseph is crystal clear about one thing: “I watched her die… and I did nothing. NOTHING.” He admits that he’d suspected as much, but still — he’s crying, his speech is halted. This is affecting him. “But Eleanor would still want me to help you with Hannah,” he says. June resorts to crying and begging that he hand Hannah over so she can live with June and Luke in Canada. “It’s never gonna happen,” he says, so she loudly tells him what he can do with himself, then throws the phone and starts destroying the garden on the side of the house in her fury. Luke comes out and wraps his arms around her, repeating that it’s going to be OK, as June brokenly says, “Let me go. Please let me go.”

The call cements one fact: “I’m so done with that son of a bitch,” June tells Tuello re: Lawrence. He wonders if she’s also done with Nick; she’s surprised to learn that he turned down immunity in exchange for being the U.S.’s inside man in Gilead. But the offer’s still on the table, so if June wants to “put your power to use,” Tuello says, that would be a good way to do it. She thinks for a minute, then asks him to set up a meeting with Nichole’s dad. 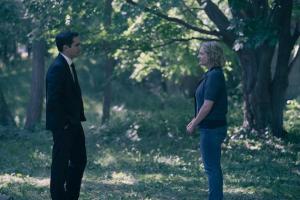 COMMANDERS MAKING MOVES | You know how all of Nick and June’s rendezvous are bittersweet? Well this one, which takes place in the middle of nowhere, is EXTRA like that. He says he wishes she’d agreed to move to New Bethlehem. She is brought up short by the news that Rose is pregnant. “Gilead is changing. There’s progress under Lawrence. We’re making it better,” he says. “’We?’” she replies, incredulous. They realize it’s going to be even harder to see each other from now on, they exchange “I love you”s, and then he leaves without kissing her. “Hey Nick?” she says as he turns to go. “Children look to their fathers, you know? Set an example.” After he leaves, she exhales and cries a little.

Back in Gilead, while some wives gather for what I think is Rose’s baby shower, the men congregate in the study. They congratulate each other for China, Russia and North Korea’s affinity for Gilead and its tactics, then Commander MacKenzie brings up June and notes that it’s time to “fix that problem”… which will become important later. 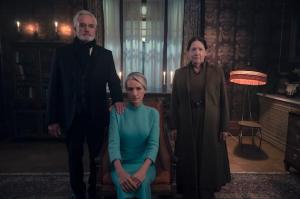 Oh, and when Lawrence puts his hand on Naomi’s shoulder at the end? He’s not being what passes for brazen in Gilead: They’re engaged! As we see earlier in the hour, Aunt Lydia oversees a proposal for the two crazy kids — and even though Lawrence literally had her former husband killed in front of her, Naomi fears getting sent to the Colonies so much that she agrees — though does she really have a choice? — to become the new Mrs. Joseph Lawrence. For what it’s worth, neither party seems psyched about it.

SHOTS FIRED! | Back in Canada, Tuello reads the names of the dead at a vigil for the victims of the failed mission. But it’s hard to hear him over the anti-refugee protesters who have ringed the gathering. The mission commander’s little daughter comes forward to recite the Pledge of Allegiance; when she falters, June steps up to help. They’re almost at the end of the oath when someone shoots at them. We watch in slow motion as June dives on top of the girl to shield her, bullets ripping into the flag that’s hanging behind them.

LOOK AT HER GO! | Meanwhile, at the Wheelers’ home, Agnes oversees a photo shoot of Serena and Noah but shuts down the new mother’s request to attend the opening of the fertility center with the baby in tow. When Serena asserts that Gilead’s commanders sent her to Toronto as an ambassador for the fledgling country, Alanis snaps that she and her husband don’t answer to the commanders. Interesting — and chilling — to think of the rogue-faction potential, no?

Mrs. Wheeler is really reveling in her power as she demands that Serena pump instead of nursing Noah when it’s time for him to eat, then she refers to the baby as “my smart boy.” You an almost SEE the thought process as Serena nearly punches her, then remembers what June said about plotting her revenge, then acquiesces. And that night, she approaches Ryan Wheeler in his study to pitch her attendance at the center’s opening, a move that works.

What's New on Netflix in December — Plus: Amazon, Disney+ and Others

The next morning, though, Alanis is so livid that she slaps Serena twice in front of their horrified nanny. “Stay away from my husband,” the younger woman threatens. “Who do you think you are?” Serena is done playing nice. “I am Mrs. Frederick Waterford,” she says, quietly but scarily. “To me,” Alanis counters, “you are just a whore.” Then they all get in the car for I’m sure is a super-fun ride.

Serena, with Noah in her arms, holds court at the center until the Wheelers decide that’s enough and it’s time for her to go home. She’s disappointed but asks to nurse her son first, and because there’s no bottle in the baby bag, they grudgingly agree. So the nanny — who you’re probably realizing is the true hero of this interlude – brings Serena to a side room, hands over the bag and gives the mama some privacy… to scoot out the exit door. She literally jumps into traffic, stopping a woman and asking her to “Please help me save my son.” The drive agrees, and they’re off!

Now it’s your turn. What did you think of the episode? And are you ready for next week’s finale? Sound off in the comments!