Sleazy come, sleazy go. Not long after Sunday’s episode of The Walking Dead revealed that Lance hadn’t actually been killed by a zombified Sebastian last week, but had just fed Calhoun’s remains to the reanimated corpse of Pamela’s son, than it put an end to the conniver’s miserable life for real. And if you keep reading, we’ll go over not only that fatal twist but all of the action in “What’s Been Lost.” 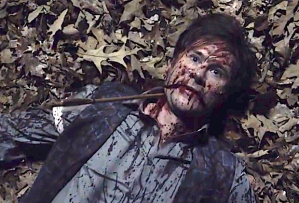 ‘DIDN’T WE ALREADY SAY GOODBYE?’ | After realizing that all of their loved ones had been abducted by the governor — even Dog!!! — Daryl and Carol teamed up to spring Lance from prison. Once he’d led them to the location from which they could follow the Commonwealth’s train to their friends and family, they set the scoundrel free. But… but… didn’t they want to run the mega-community with him? Um, not so much. That being the case, “you can run,” Carol said. “But that’s all you’re gonna get, a chance.” Sure that he wouldn’t survive on the outside, Lance instead grabbed the nearest firearm and pointed it at Daryl and Carol. Big mistake. Before he could sputter an “On second thought… ” Carol had put an arrow through his neck.

‘RIGHT NOW I’M THE BIGGEST THREAT YOU HAVE’ | Back in the CW, Yumiko was horrified to learn that Pamela was using her loved ones as leverage to force her, of all people, to prosecute Eugene. Yumiko thought that there might be a way out of the mess when a chance encounter with Connie put the attorney on the trail of one of the governor’s henchmen. But alas, she was busted and made to take part in Pamela’s press conference. A funny thing happened along the way, though. Yumiko overheard on a trooper’s radio that the soldiers who’d been pursuing Daryl, Carol and Lance had been killed. So, newly emboldened, rather than announce that she’d be prosecuting Eugene, Yumiko announced that she’d be defending him.

And in the final moments of the episode, we saw a group of Pamela’s prisoners, among them Ezekiel, being drugged as they were bused from the Commonwealth to another location. So, your thoughts on the episode? Was I the only one who thought that Lance was toast last week? And Dog has to be all right… right?