Before The Voice marched any more contestants onto the Battles-field Tuesday, it first had to resolve Monday’s cliffhanger. You’ll recall — or if you don’t, you can catch up via our recap here — that Team Blake’s Austin Montgomery and Tanner Fussell had absolutely slayed Johnny Cash’s “Folsom Prison Blues.” I predicted that their coach would give Tanner the win, and Austin would be stolen or saved. Aaand…

Nope, I was wrong again. Blake kept Austin, and despite the awesome performance that Tanner gave (rewatch it above), Blake didn’t save him, and none of the other coaches stole him. With that, we were off and running with Season 22’s befuddling decisions! How did the rest of Tuesday night play out? Read on… 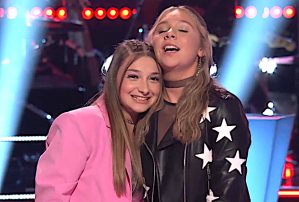 Team Gwen: Rowan Grace (Grade: A-) defeated Jillian Jordyn (Grade: B) on “Fingers Crossed” | Pre-Battle of the BFFs, I assumed that this one was Rowan’s to lose. As her coach pointed out, “She can take lyrics that she didn’t write and make you believe that she wrote ’em.” But Jillian really stepped up, making this a much fiercer fight than I’d anticipated. Both teens got a smidgen iffy toward the middle; however, they nailed some lovely harmonies and, overall, did a pretty tremendous job. That said, Rowan was still the winner for me. As well as Jillian did, her teammate has the richer, more expressive voice and seems a lot freer in the way that she is able to wield it. (Unrelated: Does Gwen’s advisor Sean Paul have… fangs?) 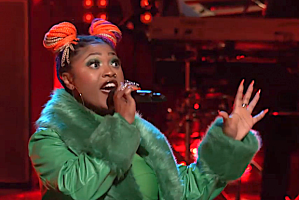 Team Legend: Valarie Harding (Grade: A) defeated Dia Malai (Grade: A-) on “Bust Your Windows” | Once the contestants got over the shock of Jazmine Sullivan advising them on their performance of her song, she suggested that Dia Catwoman it up a bit, and John recommended that Valarie remember that she was singing lead, not a backing vocal. On stage, damn! They were both pretty kickass but in altogether different ways. Valarie is probably the stronger singer overall, but Dia has so much more stage presence. So between the fact that I couldn’t take my eyes off her and the fact that she also sounded really good, yeah, she’d have been my pick. 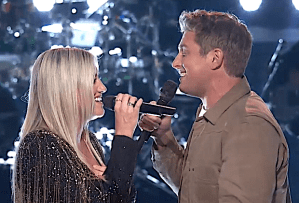 Team Camila: Morgan Myles (Grade: A) defeated Steven McMorran (Grade: B+) on “Wrecking Ball” — Steven saved by Camila | In rehearsal, the teammates’ rendition of Miley Cyrus’ hit gave advisor Charlie Puth leg chills. Camila wanted her belters to lean more into singing to one another and experiment more with their delivery. In the moment of truth, they did just that, turning out a pretty magnificent duet. Steven was solid and very Michael Bolton-esque, but Morgan… wowza. She not only had stage presence to burn, but she was able to shred her voice to stunning effect. As Blake put it, “When she hits that Bonnie Tyler gear, you just go, ‘Whoa.’” I did, anyway.

Which performance really wowed you Tuesday? And which contestant were you the sorriest to see leave? Vote below and hit the comments.