Step aside, Priyanka and Icesis Couture, it’s time to make room for a new Queen of the North.

Canada’s Drag Race crowned its third-ever winner on Thursday in a dramatic finale that saw the final four queens of Season 3 — Gisèle Lullaby, Jada Shada Hudson, Kimmy Couture and Miss Fiercalicious — face off in an all-out smackdown for the win.

Heading into Thursday’s finale, Gisèle and Miss Fiercalicious were the ones to beat; both queens have two wins tucked under their belts, and neither has had to lip sync for their life more than once. Jada and Kimmy both had a single win to their name, and both queens have found themselves in the bottom twice.

And because no finale would be complete without a little song and dance, the queens were tasked with writing, recording and performing their own verses of “True North Strong (and Fierce).” Was everyone in the group a singer? No. Was everyone a dancer? Again, no. But the final foursome still left everything on the stage, which is all we can really ask for in the end.

This season’s final runway, “Couture Eleganza,” was less of a mixed bag, with all four queens bringing their A-game in gowns reflecting their respective personalities, styles and cultures. It remained any queen’s game as the show’s panel — Brooke Lynn Hytes, Brad Goreski and Traci Melchor, plus gold medal Olympian Sarah Nurse — made their final judgments.

Everyone in the building — including this season’s eight eliminated queens, all of whom were invited back for the coronation — was gagged when Brooke Lynn announced that Gisèle and Jada would be lip syncing for the crown, bringing Kimmy and Miss Fiercalicious’s journeys to an end. 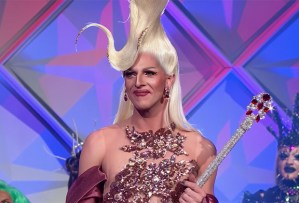 Your thoughts on the winner of Canada’s Drag Race Season 3? Vote in our polls below, then drop a comment with your full review.