Warning: The following contains spoilers for The Boys Season 3, Episode 7. Proceed at your own risk!

The latest episode of the Prime Video series dropped a wallop of a cliffhanger twist: At the conclusion of this week’s installment, Soldier Boy called up Homelander to share some shocking information that he had learned from Mindstorm (before he bludgeoned him to death with his shield). It turns out, back in the day, Soldier Boy handed over some of his swimmers to Dr. Vogelbaum, who used them to create a kid in the spring of 1981.

“You know what the bitch of it is? If they had just kept me around, I would have let you take the spotlight. What father wouldn’t want that for his son?” Soldier Boy told a stunned Homelander.

Going into next Friday’s season finale, the fatherly twist will pose “a huge complication for Butcher” and the deal he made with Soldier Boy to end Homelander’s life, showrunner Eric Kripke previews. “If [Butcher’s] goal is to kill Homelander, you now have a very emotionally unpredictable Soldier Boy, who if you look back now, there’s multiple times he’s talked about how he’s wanted kids. So right up until the very final moments of the finale, there’s a big question about which way Soldier Boy’s going to go.”

The revelation that Soldier Boy is Homelander’s biological father presents yet another big divergence from the comic book canon surrounding Jensen Ackles’ original celebrity supe. But the decision behind the change made a lot of sense once the overarching concepts of the season started to come into focus. 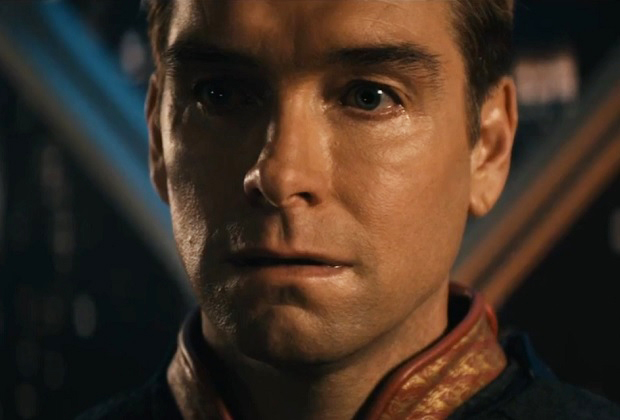 “Part of it was just sort of slowing down and looking at all the themes that were emerging from the season, and so much of them were about fathers and their children — Mother’s Milk and his daughter, Mother’s Milk’s father and him, Ryan, of course, Hughie’s feelings about his dad. It just kind of kept repeating on and on and on,” Kripke shares. “It was not really until midseason, but someone pitched, ‘Well, shouldn’t Soldier Boy be Homelander’s father?’ and it really kind of locked into place because it was one of those things that just made sense. Not just because story-wise it makes sense that that’s how they would make Homelander, but it just makes sense from an emotional perspective of so much of the toxicity of Soldier Boy has evolved into the toxicity of Homelander. So it kind of snapped together emotionally, too.”

After the idea was brought up, Kripke and the writing team then went back to earlier scripts to add in thematic clues and mentions of “how much Homelander wished he had parents and how much Soldier Boy wanted children.”

“What’s, frankly, a blessing about streaming is you can really break and write most of the season as a coherent piece,” Kripke says. “So there isn’t retconning like there is in network [shows], where you’re trying to adjust something that’s already aired. You have the power that if a great idea comes up midseason, you can go back and rewrite up to that point to make it part of the story and make it coherent. So I would say it’s just a natural revision of a script rewrite.”

“We went back and we rewrote Episode 5 so that the confrontations between Soldier Boy and Crimson Countess, and Homelander and Maeve, really imitated each other,” Kripke continues. “So we started just layering in all this story that would make sense that they’re really from the same bloodline.”

The Boys fans, what did you think of the twist? Did you see it coming? Grade the episode, then hit the comments!