Candy did not throw Betty a baby shower because she had “the best party house” — despite what she told Allan and her bestie Sherry on Wednesday’s Episode 3 of Candy.

There are two more plausible reasons. One, the eponymous character behind Hulu’s limited series was likely bored and craving drama. Ennui certainly inspired her to plan and execute an extramarital affair with her fellow church member Allan, which included precooked meals secured in Tupperware. Betty reasoned that because their dalliances happened during Allan’s lunch hour, he might as well consume food.

The other reason was guilt. Candy actually seemed to feel badly because Betty didn’t have any friends and she was hooking up with Betty’s husband behind her back, so perhaps some part of her thought a baby shower was the answer. She wasn’t counting on Allan coming to the party or Betty talking about how they’d renewed their love through the Marriage Encounter program (which made her jealous), but people are unpredictable.

In the fictionalized version, Candy and Allan ended the affair soon after the baby shower. Court documents from the real case, however, noted that their trysts continued until Betty gave birth to Bethany (or Valerie on the show), the couple’s youngest daughter. The whole thing makes you wonder when Betty connected the dots. 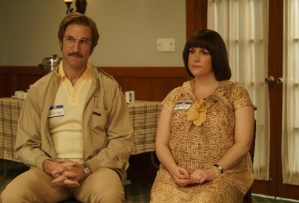 On Candy, she clearly didn’t know by the end of Episode 3 because after she had Valerie, she missed spending time with the woman she thought was her friend. She even asked Candy if she’d done something wrong, but Candy shrugged off the question and blamed the disconnect on her busy schedule.

Although Candy had parted ways with Allan so he could work on his marriage, and she’d vowed to end things if an emotional attachment had formed, Candy truly appeared hurt when the affair ended. Her portrayer Jessica Biel confirmed as much with haughty gestures and measured breathing.

Pablo Schreiber also added a captivating layer to his turn as Allan by glaring at Candy’s husband Pat just a little too long at the baby shower. Even more fascinating was the murkiness of the stare. Was Allan more jealous of Pat because he was married to Candy, or did he envy his cushy job at Texas Instruments and all the comforts it afforded them? It was likely all of the above.

Candy gave Pat a few evil looks of her own. The way Pat tossed his dirty dinner plate her way without thanking or acknowledging her certainly didn’t help, and the hot-fudge sundae moment of selfishness also stung. No wonder Candy skipped class and headed to the disco. She needed to dance and feel desired. How all of this led to Betty’s murder remains to be seen.

What did you think of Candy Episode 3? And do you feel sorry for any of these characters? Drop your thoughts in the comments.