Presidential candidate Dwayne Johnson has his own internet troll on Young Rock, and on Tuesday’s installment, viewers found out a lot more about him.

Guest star Sean Astin does the honors as Dr. Julian Echo, a bitter childhood rival-turned-chiropractor who starts haranguing Dwayne online to ruin his dreams of becoming POTUS. Turns out when the two were kids, Julian immediately started trying to knock Dewey down a peg by questioning whether or not Rocky Johnson was really his father.

Things kept escalating until a preteen Dewey (played by Adrian Groulx) got so fed up, he snuck Rocky’s championship belt out of their apartment and took it to school. By episode’s end, Dwayne claimed not to care about what adult Julian did to get under his skin, but he lied and found himself jumping on social media to clap back and call the bitterly divorced dad a “jabroni.”

Executive producer Nahnatchka Khan says if fans of the NBC sitcom are enjoying the increasing animosity between Dwayne and Julian, they can expect more of it in the coming weeks.

“We have a really exciting in-person plan for them,” Khan tells TVLine. “I don’t want to give too much away, but there’s going to be an unexpected brokering between the two of them. There will be a nice sit-down.” 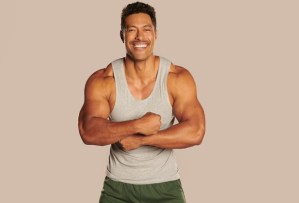 Viewers will also see the oldest Rock (Uli Latukefu) transition from his failed football dreams to life as a wrestler, which will cause unexpected strife between him and his dad, Khan teases.

“The idea of following in your father’s footsteps is a very tricky and complex thing,” Khan explains. “Dwayne starts on that journey, and that creates tension between him and Rocky.”

Are you excited about what Season 2 of Young Rock will bring? What wrestling stars are you hoping to see next? Drop your thoughts in the comments.