And then there were four for Survivor‘s Taku tribe, which lost its second member in just two episodes’ time.

In Wednesday’s installment, we saw the return of the Beware advantage and a wild blindfold challenge, which ultimately sealed the fate of Marya Sherron, who was unanimously voted out following the tribe’s devastating loss. (It all came down to a single puzzle piece — read all about it in this week’s recap.)

During her short time on the island, Marya shared her story as a 47-year-old mom looking to set teaching and parenthood aside (temporarily) in order to put herself and her dreams first for a change. She also discussed the loss of her brother, who became the first healthcare worker in the United States to lose his life to COVID-19 at the very start of the pandemic.

So what led Marya to take a Shot in the Dark, and did she find the closure she was seeking following her family’s loss? She spoke to TVLine Thursday about all of this and more.

TVLINE | You used your Shot in the Dark at Tribal Council. Did you feel you were 100 percent the target that night?
MARYA SHERRON | I did not up until minutes before we left for Tribal Council. Lindsay winked at me, and I had gotten to know her enough to know that that’s not her personality. My immediate thought was she’s trying too hard, and if she’s trying too hard, then things are not as we said. Jonathan came in and laid next to me in our shelter just as we were getting ready to go and he said, “I’m sure going to miss Maryanne,” and again, it was like, “You guys are smoothing this on way too thick, so I think I’d better look out for me.”

TVLINE | Was there anyone on the tribe that you felt fully had your back? Who were you most connected to?
Jackson, but after Jackson left, Omar for sure. I think had I fought harder that I could’ve at least tried to convince him to go with me, but part of what we didn’t see… Maryanne went on that boat. That was part of the discussion. They didn’t show this, but the story that she told us when she came back, I knew she wasn’t being honest. I was confident she had an idol. I was also pretty confident she would vote for me. So if she has an idol and she votes for me, even if everyone else votes for her, I’m still out. And Jonathan and Lindsay, no one was going to get rid of them. They were so tight.

TVLINE | I wanted to ask you about Maryanne. It doesn’t seem like she has an off switch. How was it living with her and was there any tension or annoyance there?
It was, for me, very difficult. It’s like when you break up with someone and you’re like, “It’s not you, it’s me.” I think this was me. I was overstimulated. It was just too much and I didn’t expect that! I really thought, “I’m a teacher, I’m around young people all the time,” but what I realized later: I’m in control then. I can have them be quiet. [On the island,] I was trying not to be the mom. So what am I going to do? Go in the corner? Ask if we can have quiet time? [Laughs] I really would’ve been going home then! But it never ended. It was just a lot for me. And this is not a comment on her character or her person. All of that life is beautiful, right? In my own home, I have a She Shed with a Do Not Disturb sign. There are just times where I’m like, “I am off limits.” I actually need to just reflect. But, I was so over… over her, overstimulated. I just needed some quiet for a minute.

TVLINE | You shared the story of losing your brother during the pandemic, and I’m so very sorry for your loss. Is there anything else about him that you want people to know?
I’m actually working on a project to tell his life story. There’s so much. There’s not any one thing. He was an amazing nurse, literally gave the coat off his back to a homeless person who was in the hospital and wouldn’t leave because it was cold outside. He was that person. He was the best human being I will ever know in life. But his life, like all of us, was textured. He was a professional dancer before he became a nurse, and I think that’s where it overlaps with Survivor. He just went for his dreams. Whatever he wanted to do. And I’m the planner like, “Well, we’ve got to work this out. Let’s do a three-year plan,” and he’s like, “Stop! Just go if you want to do this! Pursue that!” He was definitely the voice in my ear saying, “I know you’re terrified, but you need to go. There’s something for you there. Live and dream.” He’s my muse and motivation. 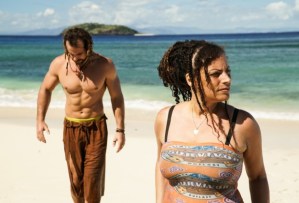 TVLINE | Did you get the closure you were seeking while out on the island?
No, not at all. But I will say that what I did learn was that I don’t need closure. It’s something you hear and something you say, but to really think about that now, what does that mean? That I closed the door? No! I want him with me. I gained so much from my time there, I could write a book, honestly. I was looking for the wrong thing. I didn’t really know what I was looking for, but not having the closure turned out to be the gift. That’s pretty ironic because that’s what I was going for, but that wasn’t it.

TVLINE | What was your family’s reaction to the episode last night?
We all had a breath of relief because we didn’t know what to expect. You have all of these hours there and you don’t know what’s going to be shown. I didn’t want my parents to be upset about anything. But we were so grateful and so pleased with the way that Survivor and CBS dealt with my brother and told the story. It was so delicate and graceful, and even the tribute at the end, we all lost it. It was so beautiful. We’re just grateful.

TVLINE | How important was it to you to shed the “mother” role when you were playing? The game — and especially juries — haven’t been kind to mother figures in the past.
I didn’t want to be motherly as in bossy or annoying. I teach young people, and they don’t want other mothers. They don’t want another mother on an island. So hey, you’re an adult, I respect that, I’m going to give you your space. If you want my input, here’s what I think. After I say what I think, I’ll leave it alone. But there was a scene when Maryanne went on the boat where I said I wanted to go, too. She jumps up and down and says, “I want to go!” Someone said do rock, paper, scissors, then she’s like, “I really want to go!” At that moment, I looked at her and thought, “How dare you take that opportunity from this young person,” and that’s where they picked it up [on the show]. I was like, “OK, go ahead and represent.” I should’ve done rock, paper, scissors, but I’m not… it’s just hard to be like, “Think about you! You came here, too. You have experiences you’ve yet to have.” That takes a lot of work. It started there and I’m still working on it. 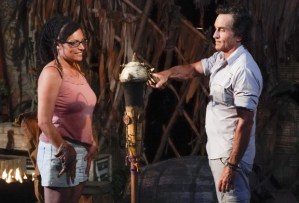 TVLINE | Was there anything about your gameplay or your relationships that you wish was shown on TV?
Yes, I wanted to see me hauling all that bamboo and hanging with Jonathan! I know he’s superhuman, but I worked my butt off doing everything everyone else did. I wanted to get there and build a shelter. I wanted to be in the elements and experience everything. Also, at the first challenge where we had to push the boat up, there was this big circle and you had to sit and dig this big bag out — one person, you couldn’t switch out. That was merciless! And I did it, and even before Mike got his bag out! We didn’t see that scene, and I really wanted my boys to see that. I look like the old whatever next to Jonathan and Lindsay, but I kicked butt! [Laughs]