The Season 1 finale of The Afterparty brought Apple TV+’s comical whodunit to a close, as Detective Danner conducted her final interview and found the missing pieces to the investigation’s puzzle. In the episode’s opening moments, Danner turned her attention toward the cutest of all eyewitnesses — the one who only wanted her precious li’l koala back — Zoe and Brett’s daughter, Maggie. So what new info did the little girl provide, and most importantly, who-friggin-dunit already? Let’s break down Episode 8!

Maggie backs up her dad’s story about the missing stuff animal, and even though her pops told her to wait in the car, she snuck inside in search of her missing fruit snacks. There, she saw Aniq passed out on the floor, and that’s when she drew the hilarious cat face on him.

Despite hiding from her dad by donning a blonde wig, he quickly spotted her out of the crowd, returned the koala and brought her back to the car. But then she told Brett she saw her mom with “the singing man,” and says, “I think they were smooching.” Brett then said he had one more thing to do, and afterward, they’d have to go home as fast as possible.

Danner wraps up with Maggie and says she needs to check one more thing in Xavier’s room. Then, she’ll be ready to make her arrest. Though suspicions seem to have fallen on Brett, Aniq tells Jasper he doesn’t think Brett did it.

The detective returns and reviews some facts. Jennifer 1 didn’t get peed on. Rather, it was Xavier pouring out Chelsea’s drugged flask. Danner also states that she listened to five different versions of the story, and when Aniq woke up after his blackout, three people were not in the living room at that moment: Walt, Brett and Maggie. She doubts Maggie’s a murderer, so she turns to Walt, who she thinks had enough time to sneak up the stairs because nobody ever notices him. He admits he was in the bathroom planning another streaking expedition, but the second he was about to pull it off, he heard the screams and commotion. 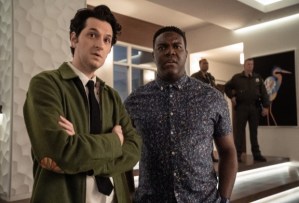 That leaves Aniq, the original suspect, or Brett, who had been missing until after Xavier’s body was discovered. All eyes fall on the latter who then blows a gasket, but Aniq thinks something’s off. He cops to seeing Brett in the driveway, which removes Brett from the hot seat. Seconds later, Aniq realizes in every story he heard, the closet door was closed, but when he went up there, it was open…

Danner admits her Brett accusation was simply a test. She says the real killer is the one with the most cartoonish tale to tell. Nope, not Zoe: Yasper (who 31 percent of TVLine poll respondents rightly fingered as the killer)! Yasper claims that when the Ska-pe Diem video came on, he was in the living room with Aniq, but everyone else said he came from the balcony.

Danner spins her theory: It all started when Yasper installed Xavier’s A/V equipment. Xavier was not his friend, and when the pop star refused to bless Yasper’s track, the wannabe musician snapped. She says he killed Xavier in order to steal the song, so he could release it as a duet with Xavier as his 2Pac. Plus, if Maggie had turned all of the studio’s faders to 10, and they were still at 10 when Danner was questioning suspects, how was Yasper in there listening to music without anyone else hearing a peep?

Yasper was actually luring Xavier upstairs by flicking the lights on and off. Yas hid in the closet, Chelsea came into the bedroom, Xavier poured out the flask, then Yasper started playing the Ska-pe Diem clip. Yasper then punched Xavier in the face before knocking him off the balcony.

Yas says he has text messages that prove he was friends with Xavier. But Danner claims the A/V pro knew X’s password and sent himself a fake text using the victim’s phone. Then, he dropped from one balcony to the lower one, entering the living room just in time for Aniq to wake up. Yasper says there’s no proof. It’s just a silly accusation, he says. 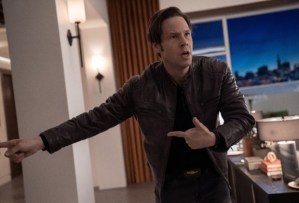 But there is proof, Aniq says. There was a camera hidden in the Private Eyes poster that recorded the whole thing. And since Yasper still had Xavier’s phone, he deleted the footage to make Danner look like a dummy. Culp pats him down, and sure enough, Yas has two phones. Danner calls Xavier’s number and Yasper’s pocket rings. Busted!

With emotion, Yasper says he gave Xavier his career and his name, and Xavier still wanted to screw him over. “I was the one who was supposed to be famous, and all I was asking for was a tiny bit of credit!” he says. “And there’s another thing you guys didn’t even think about!” With that, he bolts for the door, but is easily caught by Culp.

Yasper tells Aniq that he never meant for him to get blamed. “Aniq, you’re my friend,” he says, and as he’s getting cuffed, he apologizes.

Aniq and Zoe head to get breakfast listening to the smooth sounds of Shaggy. Zoe pulls over to the side of the road, and now that they’re finally alone, she asks if Aniq is ever going to make a move. They lock lips, but before things can get too serious, Walt, who’s sitting in the backseat, asks if he can get a ride home. Dammit, Walt!

Case closed, detectives! Looking forward to more Danner in Season 2? Grade the finale and season below, then light up the Comments.