Jean-Luc Picard is back in action as Star Trek: Picard launches its sophomore voyage — and he’s joined by a few familiar faces.

Thursday’s Season 2 premiere begins mid-action scene, with Jean-Luc and friends taking heavy fire aboard a starship bridge. The ship is near collapse, and Borg-like tentacles are firing phasers at the crew. Jean-Luc orders the computer to start the auto-destruct sequence, and a voice calls his name as the countdown reaches one. (Is that the Borg Queen?) Then we flash back to two days earlier, where Jean-Luc is happily picking grapes at his tranquil French wine chateau. He and Laris toast to another successful growing season, and to Zhaban’s memory, and she asks him why he’s chosen to be alone all these years… while she leans in for a kiss. Jean-Luc pulls himself away, though.

We see memories from his childhood, with his mother trying to get him excited about living at the vineyard. But little Jean-Luc only has one question for her and his dad: “Will you fight less here?” (Ouch.) She reassures him that their troubles seem tiny from space, and back in present day, Jean-Luc gives a commencement speech at Starfleet Academy, pointing out Elron as the academy’s first fully Romulan cadet and quoting his mother: “Look up, Jean-Luc, and let’s see what’s out there.” We also spot Raffi, who’s now a captain, in the crowd.

Seven of Nine, meanwhile, has taken command of Rios’ ship and fends off a gang of thieves looking to loot her medical supplies. (She gets a hand from Rios’ virtual assistant.) She’s a loner, just like Picard, but she’s stopped in her tracks when she sees a sinister space anomaly on screen: “What the hell is that?” We also catch up with Dahj, who toasts the lifting of the ban on synthetics, and Jurati, who drunkenly waves off a guy hitting on her. She “drunk hails” Rios, who now helms Jean-Luc’s old vessel the Stargazer. He’s also run into the space anomaly and needs Jurati’s help in figuring out… well, what the hell it is. They receive a signal from it that Jurati determines is dozens of languages layered on top of each other, all saying the same thing: “Help us, Picard.” 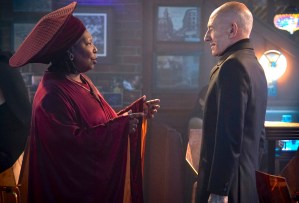 Speaking of Jean-Luc, he takes a side trip to a Los Angeles dive bar to check in with his favorite bartender: Hey, it’s Guinan! They have a warm reunion, but she can sense there’s something wrong. They talk about his loneliness, and he thinks that particular ship has sailed, but she tells him it’s not too late: “The problem isn’t time. It’s you.” She can tell something is holding him back. (Is it his childhood trauma?) Soon, he has bigger fish to fry: A Starfleet admiral plays the anomaly’s message for him, which was accompanied by a petition to join the Federation. “An unknown entity who can open and close a hole in space time” wants to join the Federation, she says, and it wants Jean-Luc’s help.

He’s hit with a powerful wave of nostalgia as he boards the Stargazer, feeling like “my life has come full circle.” On the bridge, he hails the anomaly, and it responds by hissing his name and fritzing out their systems. A formidable vessel appears on screen… yep, it’s the Borg. Starfleet sends a bunch of ships as backup, with Raffi commanding the Excelsior. Jean-Luc ponders whether the Borg’s petition to join the Federation is genuine, but Seven doesn’t trust them and fears this could mean “the beginning of the end of the Federation.” The Borg want to send an emissary, and though Rios refuses, a transport ship approaches with the Borg Queen onboard. Rios raises shields and warns them to stop, and soon, the Borg ship is firing at the Stargazer, while the Queen transports right onto the bridge, in a black cape and full face mask. “We wish for peace,” she says, but first, they require “power.” Her tentacles shoot out and dig into the controls, and we’re back at the beginning, with the ship in dire straits and Jean-Luc ordering a self-destruct. As a lilting French song plays, the countdown hits zero, and the ship explodes. Is this mission over before it even starts? 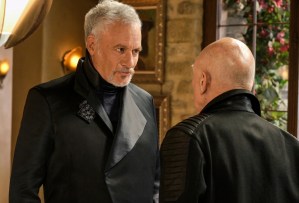 Well, maybe not: Jean-Luc wakes up in his chateau again, staggering to his feet and gazing at a strange portrait of himself on the wall. He calls out for Laris, but is instead greeted by a helpful android named Harvey he doesn’t recognize. He wonders aloud what’s happening. “An excellent question, Jean-Luc,” a familiar voice replies — it’s Jean-Luc’s old nemesis Q! The trickster god appears in his younger TNG form at first, but when he sees how Picard has aged, he snaps his fingers to “catch up,” giving himself gray hair and a goatee. He reminds a bewildered Jean-Luc that he once told him “the trial never ends,” adding that they’re at “the very end of the road not taken.”

The Borg! Guinan! Q! Grade the Picard premiere in our poll, and then beam down to the comments to share your thoughts.