This week’s sixth episode of Peacock’s Bel-Air was all about Will navigating his feelings about his best friend Trey, and new friend Lisa.

Will’s decision to stay in Los Angeles instead of returning to Philly didn’t sit well with any his friends from back home, and they branded him as a traitor all over social media. Upset and angry, Will brushed off Aunt Viv’s attempts to console him and even broke a vase during a tantrum — a move that prompted Uncle Phil to remind him that he’s not the only one going through something.

“We got you. Always remember that,” Phil said.

Elsewhere, Hilary’s boss Kylo noted that she’s been slacking since she went all of one day without posting, which would result in them losing followers. With her cooking tutorial idea also not up to par, she needed to come up with something different that would catch viewers’ attention — and she needed to do it within the next few hours.

Making matters worse, Vivian also asked Hilary to cook for her fundraiser, since the original caterer dropped out at the last minute. (The event is to honor Vivian’s friend and Lisa’s mom, Gayle, who died in 2019.) 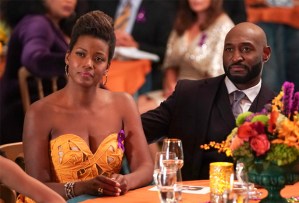 Lisa has planned a poetry reading with Carlton for the event, and confided in him about her stepmother Angela, who she felt was trying to replace her mom. Will caught the pair looking rather cozy during the conversation and opted for being petty when she tried to talk to him later. Lisa, of course, called Will out on it and even complained to him about Angela making the day all about her. Cue Carlton catching them in a moment, and storming off to do coke in his room.

In a drug-fueled emotional breakdown, Carlton accused Will of going back on his word and then broke down in tears, repeatedly apologizing to his cousin. Seeing Carlton in a vulnerable state, Will sat on the floor with him and offered comforting words, also agreeing to step in for him during Lisa’s reading.

Lisa’s aforementioned feelings about Angela, it became clear, were absolutely valid. While talking with Will and Vivian, Angela inadvertently revealed she was basically having an affair with Lisa’s father while Gayle was still alive. She also tried to insert herself into this already planned event, which Vivian didn’t take kindly to — and nearly booted her from the house.

Speaking of Aunt Viv, her lil’ friend Reid happened to be hanging in her art room admiring her painting. Laying it on thick, he made a bet: if her painting sold for more than $15K at the silent auction, she had to show her work at his gallery opening. If it didn’t make more than that, he would leave her alone. He won the bet thanks to Phil, who didn’t realize he basically ensured Vivian and Reid would be spending more time together when he bid $20K on her painting.

Phil had another pressing issue: his campaign. After learning The Times suddenly revoked their endorsement, he sent Geoffrey off to investigate. What they learned was that Lisa’s father Fred was behind the Times flip-flop and decided to run against Phil for DA. (Side note: Geoffrey definitely worked for B-613 at some point, right?)

After a long day — which included Ashley’s crush Lucia revealing that she had a crush, on Will — it was time to wrap up the fundraiser. Hilary went back to the influencer house to film her new idea: a cooking tutorial in lingerie.

By the pool, Lisa relished at the memory of Aunt Viv going off on Angela. She then asked Will why he’d been so distant, and Will told her he didn’t want to bring more drama into her life. He also suggested that he’d give her space, which was something neither of them wanted, given that they kissed seconds later. Carlton definitely won’t be happy about this.

What did you think of this week’s episode of Bel-Air? How do you feel about the show so far? Grade the first six episodes below, and share your thoughts in the comments.