The police came and arrested Zac, handcuffed him and even patted him down on Tyler Perry’s Sistas this week, but there’s just one problem: The lady cop in the bad wig didn’t read the man his rights and didn’t identify herself.

When Zac asked what he was being detained for, the official-looking woman said she didn’t have to tell him who she was. She also informed him that the judge would tell him everything. When Jake asked where the officers were taking Zac, she told him the name of the jail, and Jake assured Zac he would meet him there with a lawyer.

After that, the show took every measure it could to avoid telling viewers what was going on. We found out that Danni stood up Nate on a date. We watched as Bayo the African man flirted with Sabrina and offered to take her to the continent for three days. He didn’t specify which country they would travel to or even where he was from, but he did manage to flex on her with his bloated bank account full of millions of dollars. But Sabrina turned him down anyway, and he left his business card just in case.

Meanwhile, Maurice had to tell Calvin he didn’t give Que the green light to move in with them and Que was lying. Andi decided not to take the penthouse from Gary after all, and Fatima helped her with that decision by wisely giving her a rubber-band ball that helped her realize Gary was more trouble than he was worth. 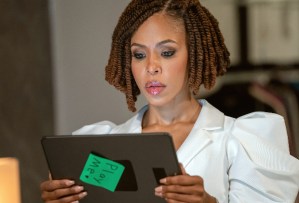 She also told Karen the news, and Karen commended her and reiterated that if she had taken the penthouse, Gary would pop up on her anytime he wanted because he would feel like he owned her.

Andi decided to sell the penthouse and give Gary the money, and Karen agreed that was the best thing to do. The attorney also announced she would have dinner with Gary, but that was it. Speaking of Karen, she saw Aaron, and they argued about the baby.

Karen said it wasn’t his, and Aaron begged to differ, and he vowed to love her no matter what. Unfortunately, Karen still hasn’t made a doctor’s appointment.

After all of this stalling, an officer came and let Zac out of his cell, and he was taken to a questioning room where Jake and a lawyer informed Zac of the charges… and we still don’t know what they are because no one said. Sigh. Our best guess — it has something to do with Hayden.

What do you think Zac has been arrested for, and can you tell us? And why hasn’t Karen made a doctor’s appointment? Drop your thoughts and best guesses in the comments.