We had to wait the entire episode, but Karen finally told her girls she’s pregnant on Tyler Perry’s Sistas this week.

The news came after Danni, Sabrina and Andi tried to get Karen to drink to celebrate the fancy new penthouse Gary bought Andi. A place so fancy, Andi orgasmically cried about it. The climax came to an end when Karen dropped her baby bomb and caused everyone to ask tough questions and frown.

Up until that moment, Andi was dealing with her own crisis. Gary bought the penthouse apartment in her building as a surprise and had all of her belongings moved to the new place. Once Andi recovered from thinking she had been pranked, she calmly talked to the doorman, building manager and eventually Gary to find out what was really going on.

When Gary arrived, he expected Andi to be happy and excited about the purchase, but she wasn’t. Instead, she rightfully asked Gary if he thought “buying her” was going to work. Gary swore that he wasn’t attempting to purchase her love but become a better man for her. Andi argued that she had moved on and was having a great time being with Robin, and a jealous Gary begged her to change the subject. 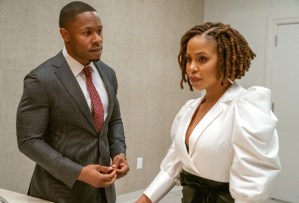 An unimpressed Andi asked if the new penthouse would include Gary and his whores (hehehe) in her bed, and Gary promised he had changed. Andi didn’t believe him and asked that he have her things moved back to her old place, but before they could talk further, Karen, Danni and Sabrina showed up for girls’ night and sternly asked old boy to leave, and he did.

All three friends asked Andi what the hell was going on, and she told them about Gary’s attempts to woo her back with the penthouse purchase. She also mentioned that the cash was in escrow, the penthouse was in her name and all she needed to do was sign the papers. Andi described the whole experience as crazy, and Karen agreed and mentioned the Rolls-Royce Gary gave her, which only shocked Danni and Sabrina more because they didn’t know about the car.

Suddenly, Danni, who has never liked Gary, was telling Andi to “rethink” him, prompting Sabrina and Karen to adamantly disagree. Both women said if Andi were to take his expensive and elaborate gifts, there would always be a chance for the hedge fund manager to get mad and take back everything. But Danni said because the penthouse is in Andi’s name, he wouldn’t be able to repossess it, and then she hilariously compared Andi and Gary to George and Weezie Jefferson. 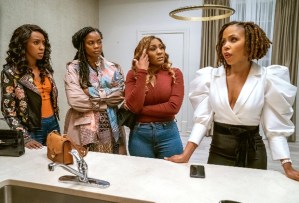 After Sabrina and Danni ran off to check out the penthouse, Andi asked Karen what she should do, and Karen said Andi should keep taking Gary’s gifts, but Andi declared that she has money of her own. Karen reminded her bestie that Gary has much more money than her, and Andi agreed, citing the $3 million penthouse as the perfect example.

Speaking of the palatial penthouse, Danni and Sabrina lost their whole minds when they saw all the space, luxury and breathtaking views it offered. Sabrina decided Andi’s choice was a hard one, but Danni said it wasn’t because the place was too nice to turn down and threatened to move in and become Andi’s sister wife.

Over at Zac’s new house, Fatima finally told him who “Scary Gary” was, and Zac asked if he was good at his job. Fatima said he was but begged her boyfriend not to give Gary his money, and he promised he wouldn’t. Andi called and invited Fatima to Karen’s “talk,” and after discussing it with Zac, Fatima maturely decided to go just in case Karen actually wanted to chart out a legitimate co-parenting plan. 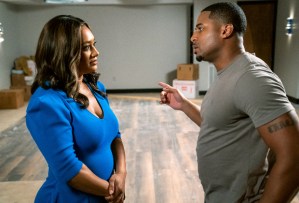 Slimy Gary, meanwhile, committed a flagrant foul on the basketball court when he asked Zac to put in a good word for him with Andi in exchange for legal help regarding his stocks.

A disgusted Zac, who had already bumped heads with Aaron verbally, took his ball and went home but not before telling Gary he’s not Andi’s pimp and he doesn’t do manipulative favors like that. So much for that bromance.

Do you think Andi should take the penthouse, and are you worried about Zac’s legal woes? And will Fatima try to kill Karen or hear her out? Drop your thoughts in the comments.