When Netflix’s hit zombie K-drama All of Us Are Dead first began, Nam-ra was a sullen and reluctant junior-class president who would rather listen to the music in her earbuds than interact with her classmates.

In other words, she was a typical teen. This all changed when Gwi-nam bit her and she became a hombie (human-zombie) with insanely good hearing and an unflinching loyalty to her new friends. Nam-ra wanted to feast on her almost boyfriend Su-hyeok, as well as On-jo and Ha-ri, but the human part of her overpowered the beast within, and she eventually parted ways with the group.

Before she split, Nam-ra saved them in the finale when a group of zombies (that only she could hear and smell) ran to attack them all. Nam-ra also had to kill Wu-jin when he turned after getting bitten during the attack and was about to bite and pounce on his big sister Ha-ri. His sister stopped Mi-jin from killing Wu-jin as he was transforming, but Nam-ra was stronger and faster and knew what needed to be done, so she broke his neck.

Soon after that, Ha-ri and Mi-jin didn’t want anything to do with Nam-ra, but On-jo and Su-hyeok still had her back and wanted her to stick around so they could all stay together as a group. Nam-ra’s hunger was too great, however, and after eating some dead zombie guts and nearly biting On-jo, she realized everyone would be safer if she got away from them. 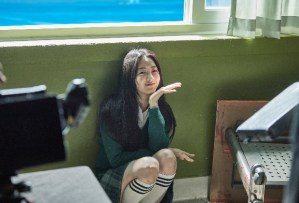 This was probably best because the military took in the surviving six soon after, and Nam-ra wouldn’t have been safe in their care once they realized she was only partially human. Once inside, one of the commanding officers tried to interrogate the kids about their science teacher, the one who started the Jonas Virus, aka the zombie bug, but the kids weren’t having it.

Su-hyeok proved to be the most vocal and rightly asked why the military had abandoned them. After all, if they had picked them up in the helicopter like they said they would, Cheung-san, Joon-Yeong and even On-jo’s dad might have survived. That said, are we sure Cheung-san is dead? It’s worth pondering for a couple of reasons. 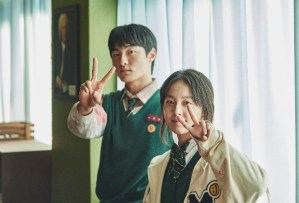 One, there will likely be a Season 2 — although Netflix hasn’t officially announced it — and two, we saw his body atop that heap of ash-covered zombies, but maybe he re-animated after everyone left because of his love for On-jo. Gwi-nam did bite him, and you see how that worked out for Nam-ra. Speaking of Nam-ra, didn’t she look great at the end when the surviving six met her fireside on the roof of their old school months later? So hombies can heal?

Most importantly, Nam-ra ran off from her friends because she said, “They’re back.” Who was she talking about, if not Cheung-san and Gwi-nam? Well, hopefully it’s not Gwi-nam because he’s the worst.

What did you think about the Season 1 finale, and will you watch if there is a Season 2? Grade the closer in our poll, and drop your thoughts in the comments.