Carrie tried to dip her toe back in the dating pool on And Just Like That… this week, but something on her finger held her back.

She tells Charlotte and Miranda she’s going on another date with that teacher Peter, and Miranda asks them to come help paint a women’s shelter with her and Nya. (Oh, and Charlotte thinks she’s finally done having her period and is officially entering menopause.) But when Carrie’s cool young neighbor gives her a new ring as a thank-you, she sees that Carrie is still wearing her wedding band. So maybe she’s not ready to move on from Big yet? She and Seema wait in line at a hot nightclub to go out dancing for Seema’s birthday, but they’re rebuffed by the doorman — when Seema tries to slip him money, he tells her, “That’s really offensive” — so they settle for cake and Champagne at a nearby restaurant. Seema declares she’s very happy not having a man in her life… which sounds like some heavy foreshadowing to us. 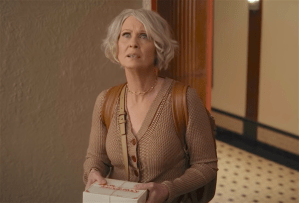 Miranda and Che share a giggle together over diner food — although some fans of Che approach and remind them that Che’s slept with several friends of theirs. Later, Miranda tries to surprise Che with cookies (“I was craving me some Che” — yeesh) and instantly worries they have someone else there, but Che was just busy writing. Miranda starts to scurry away, but Che stops her, telling her to stop putting conventional labels on what they have: “I’m not a guy, you’re not my ‘girlfriend,’ and we’re not ‘dating.'” They do tell Miranda, though, that she is “the only person I’m sleeping with right now.” Well, that’s reassuring.

Charlotte finds herself on the other end of the menstruation spectrum when Lily asks for help learning to put in a tampon. Charlotte interrupts her dinner with Anthony to coach Lily through it, alternately coaxing and shouting at her until the girl gets it right. (Side note: Anthony’s abrupt dismissal of his Holocaust-denying date — “Get out!” — was an instant classic.) Plus, while getting ready for her date, Carrie starts to slip off her wedding band… but she ends up keeping it on and adding Big’s band to her finger, too. She tells Peter she can’t do this, and he understands; he still keeps a voice mail from his late wife saved on his phone. They end up parting ways with a warm hug… but he’s so nice, we’re hoping this isn’t the last we see of him. 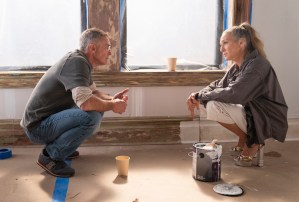 At the women’s shelter painting event, Steve shows up to support Miranda — aw, what a guy — and ends up cornering Carrie and asking her how long this Che thing has been going on. He didn’t know that Miranda wanted to be with women, but Carrie says it’s more about being with Che. When Steve presses for more answers, Carrie stumbles into a paint tray and rinses her shoe off in the sink — and drops Big’s ring down the drain in the process. Steve saves the day, though, unscrewing the drainpipe and retrieving the ring for her. He tells her his own wedding ring is never coming off of his finger, and when she asks if he could ever see himself finding someone else, he repeats: “Never coming off.” One more time: What a guy!

Nya’s husband Andre looks longingly at Lisa’s husband with their kids and admits to Nya: He wants to have kids, and he doesn’t want to talk himself out of it anymore. Charlotte has to help Lily find her lost tampon string — yep, that’s a part of having kids, Andre — and she gets her own period, too, staining her nice white coveralls, so she’s not done just yet. Seema gets approached by a slick club owner, and later, he lets her and Carrie right in past the velvet rope at his club, so her love life is looking up. And Carrie decides to put her rings away and text Peter for another date… so she’s not done yet, either.

Got thoughts on this week’s And Just Like That? Predictions for next week’s finale? Drop ’em in a comment below.