Carrie tried to impress her hip young neighbor this week on And Just Like That…, and Miranda made a big decision in her love life.

Che speaks to an adoring crowd at a gay pride rally, with Miranda beaming in the audience. But when Miranda spots her son Brady in the crowd, she skulks away… just as Che is telling the crowd “you have nothing to hide.” Afterwards, Miranda says she hasn’t told her son about any of this yet, and Che innocently asks: “He doesn’t know you’re in an open marriage?” Yeah, about that… Miranda admits that her marriage isn’t exactly open, and Che gets upset that she hid this from them: “I’m not a home wrecker.” They storm off, telling Miranda to “figure out your life.” 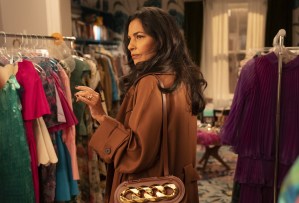 While Carrie is going through racks of her old clothes with Seema, they’re interrupted by loud cackling from the street below. She has a cool young neighbor who sits on the stoop all night and laughs it up with her cool young friends, Carrie explains. They keep her up late, and though she doesn’t want to be the cranky old neighbor, she eventually gets fed up enough to yell at them from her window. They shout up at her, “Sorry, ma’am”… and keep laughing. (Ooh, that “ma’am” has gotta hurt.) Meanwhile, Charlotte badgers Harry into wearing a fitness ring, which leads to her on her knees about to, um, show her appreciation when Lily walks in on them. Charlotte freaks out and slams the door shut — right on Lily’s face. Her excuse isn’t great, either: “I was checking your daddy’s penis for cancer.” Nice save, Charlotte.

Miranda has big news for Carrie and Charlotte: She’s going to ask Steve for a divorce. Charlotte also shares her horrifying moment with Harry and Lily… but Carrie and Miranda are stuck on the fact that she still does that: “Is it his birthday?” “Is he dying or something?” (OK, this bawdy exchange did actually capture the vibe of vintage Sex and the City. Bravo, writers.) Carrie checks in with Miranda to make sure she wants to do this: “You’re exploding his world,” she warns. Miranda counters that their marriage is already “dead in the water” and she wants to be with Che. Yes, but does Che want to be with her, Carrie asks? (Good question, Carrie!) 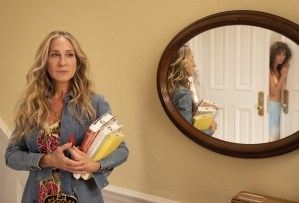 Carrie does get a sweet apology from her neighbor, and later, Carrie goes to her door with a gift of brownies, where she’s greeted by the neighbor’s boyfriend wearing just a towel. He tells her, “We don’t eat sugar,” and Carrie tries to exit gracefully, but she drops the brownies, and the boyfriend bends over to pick them up… and his towel drops. And we see everything! This is HBO (Max), after all. Plus, Miranda ambushes Che and asks if they actually have a future together. Che says they do — and tells Miranda they love her! “I can’t give you anything traditional,” they add, but Miranda is fine with that: “I hate traditional. I’m done with traditional. Traditional got me here.” She promises to take care of the Steve situation so they can be together.

Charlotte freaks out even further when she sees that Lily — who’s all of 15 — has posted a suggestive workout photo on Instagram. When she confronts her, Lily storms off to stay with Carrie, who tries to tell Charlotte that Lily is just figuring out who she is. Later, Lily explains that Instagram account is private and just for her friends, and the “penis cancer” lie seems to have worked on her, so maybe she’s not so grown up after all. Carrie keeps snooping on her new neighbor and discovers she’s a successful jewelry designer from California. (The girl also catches Carrie out on the street smoking a cigarette and wearing an old lady head scarf and rubber gloves, which is kind of hilarious.) But after Carrie witnesses an ugly breakup between her and her formerly nude boyfriend, she offers her expertise, telling the girl it’s just “New York dating.” The neighbor thanks her and declares that Carrie is “cool.” Even with the rubber gloves! 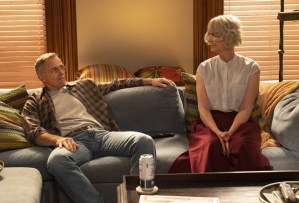 Finally, Miranda sits down with Steve and tells him to put his other hearing aid in because they need to talk. She tells him she’s not happy: “This isn’t enough for me.” When she asks him if he wants to be “sitting on this f–king sectional couch until we’re old,” he fires back: “We are old!” She’s always thought that he wasn’t enough, he says, but he always stuck around, and he felt like they had finally reached a good, stable place together. But Miranda doesn’t want that anymore — and she’s met someone else, she confesses. She calls Carrie to report that Steve just wants her to be happy… and that she’s heading to the airport to catch a flight to Cleveland and surprise Che at their standup gig. “I’m in a rom-com, Carrie!” she gushes. Hmmm… we’ll see if this one has a happy ending.

Is Miranda making a huge mistake? Drop your thoughts on this week’s episode in the comments.