Tyler Perry’s Sistas wasted no time on Wednesday getting to the good stuff. That’s because the soapy BET series opened with Andi and Fatima talking about Hayden’s death.

Andi took one look at Fatima and knew her friend and administrative assistant had more information about Hayden’s possible murder than she was letting on. She also noticed that Fatima didn’t appear to be particularly shocked by the news. Ever the “G,” Fatima refused to come clean to Andi, even though the attorney said she had to be honest in order to get help.

Fatima and her sealed lips defiantly left Andi’s office, so Andi reached out to Zac for answers instead. Zac, in contrast, was very surprised by the news and told Andi he didn’t have anything to do with Hayden’s homicide. Although Andi didn’t seem to believe him, she said she was worried about Fatima and was headed to his house to straighten out things.

On her way to Zac’s place, Andi got a call from Karen, who was dying to spill the tea on Danni and Preston. It turned out one of Karen’s returning clients at the salon had met a handsome white country boy who sounded a lot like Preston, and the guy was coming there to pick up the woman for their date. But when Karen called Danni to give her the intel, an angry and annoyed Danni barked at Karen and told her to go away. 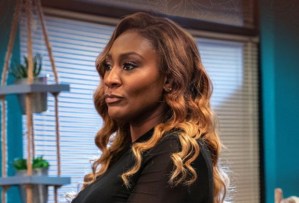 To be fair, Danni did have her hands full foiling a sex trafficker’s evil plans and consoling the frightened girl he was attempting to pick up after the man was arrested, but maybe she could’ve been a little nicer to Karen. That’s why Karen called Andi. She was hoping that at least one of her friends would be sweet. Andi wasn’t exactly nice; however, she did tell Karen that she should leave Danni alone when it comes to her complicated relationship with Preston.

Karen then asked Andi if she could visit her at the salon because she could use a friendly face, and Andi said she would after running an errand. What she couldn’t tell Karen is she was on her way to see Zac and Fatima in hopes of saving them from possible jail time.

That kind of information would’ve made Ms. Karen a little too giddy for her own good. Plus, as a lawyer, Andi has to look out for her clients’ needs first, even if “Zatima” hadn’t asked for representation yet. Zac definitely thought he might need Andi’s legal assistance after he asked Fatima what happened and old girl was like “the less you know, the better” and then casually changed the subject to their dinner plans. 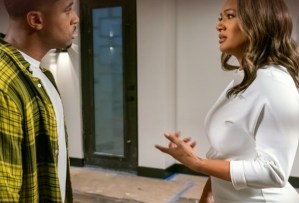 Zac recoiled at Fatima’s touch because she wasn’t telling him what he wanted to know and her body language and attitude implied guilt. This is exactly what Andi thought, too, as she walked into Zac’s house accusing him of murder. The newfound millionaire swore to Andi he didn’t kill the dude, so she turned her attention to Fatima, who was all like, “No face, no case.” Whoa.

Andi said she could hook up Zac and Fatima with a criminal lawyer if they told her the truth, but they turned her down and stressed that they were innocent. That is, until Andi said that she’d requested for cameras to be installed in the garage, and Fatima lost her cool. Worried that his boo thang could incriminate herself, Zac then made up a story about Hayden and him fighting, though Andi saw through his lies.

A freakishly calm Fatima explained that she had called the hospital, and Hayden wasn’t dead — just badly injured. She also gave them the details of her fight with Hayden and said she’d popped him in his nose and mouth with her bossgirl brass knuckles. This delighted Zac, who congratulated her until Andi shut it down. Hayden had hit Fatima, but she said she wanted him to so her boys could beat him up, put him in a coma and strip him naked on the hood of his car. 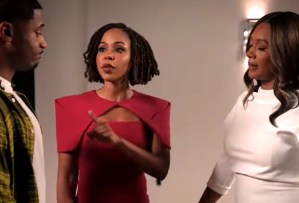 All of these details horrified a nervous Andi as she told the couple, who declared their love for each other and giggled, that everything Fatima arranged and admitted to was still very much illegal. This didn’t seem to faze the lovebirds, who happily ran up the stairs of their love nest. Meanwhile, when Andi got home, she found a car in her spot and was going to leave a nasty note when Gary popped up and asked her not to do that.

He begged her to hear him out, but Andi said he was a rude and terrible fiancé and she was glad they weren’t together anymore. She chastised him for bringing his awful sex therapist around her, and Gary apologized and said the fancy new $500,000 Rolls Royce and the designer shopping bags inside were his way of making it up to her. It didn’t seem to work, and a teary-eyed Andi said it was too little too late, but Gary refused to take back his expensive gifts.

Do you think Andi should forgive Gary or at least keep the gifts? Are you worried about “Zatima” and their possible criminal charges? Drop your thoughts in the comments.