Carrie moved into a new apartment this week on And Just Like That…, and she also considered doing some exterior work on herself.

Seema shows Carrie around a gorgeous, blindingly white apartment right on the river, but Carrie is uneasy about living downtown. Not that uneasy, though, because she later tells Miranda and Charlotte that she went ahead and bought the place. She had already looked at 46 apartments, she explains, and she couldn’t keep hiding out in her old place: “Am I living, or just retreating?” But starting over isn’t easy, either: She gets misty when a trip to her storage unit leads her to uncover a box of Big’s old vinyl records, and once she’s in her new place, she’s haunted by a maddening beeping sound that she can’t find the source of. Following Anthony’s advice, she slams the dishwasher shut a few times, but that doesn’t fix it. 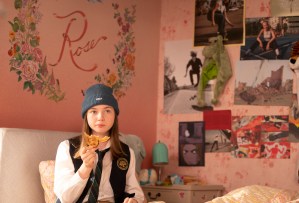 Charlotte gets her own unwelcome dose of progress when Rock tells her they want to get rid of the dolls in their room, with Lily agreeing that they’re “culturally inappropriate.” (Charlotte’s counterargument: But they’re so cute!) Rock also wants to cut their hair short and paint over their old name on the bedroom wall, so Charlotte’s head is just spinning, of course. Speaking of “culturally inappropriate,” Carrie invites herself along to Seema’s family Diwali party to act as a buffer between Seema and her pushy, marriage-minded parents. Seema assures Carrie that her wearing a sari to the party will be more “cultural appreciation” than appropriation. Um, has she seen Sex and the City 2?

Miranda, meanwhile, is still fantasizing about that steamy encounter with Che and daydreaming about it during class. She even masturbates thinking about it… which is interrupted by Brady, but Miranda manages to remind him about his math tutor without losing her focus. (Always a mom.) Her professor Nya dodges questions about her lack of kids at a dinner with her husband’s friends, including the baby-happy “Fertile Myrtle,” but later, after a bedroom romp, her husband reassures her: “It’s me. I’ve got you.” (This kinda felt like a scene from a totally different show, though? Seema has worked pretty well as an addition to the core cast, but the other newbies aren’t as seamlessly integrated, six episodes in. What happened to Charlotte’s new bestie Lisa?) 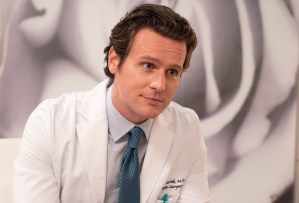 Since Anthony is the new Samantha, apparently, Carrie accompanies him on a face lift consultation, and the doctor — hi, Jonathan Groff! — mistakenly thinks Carrie is the one looking to get work done. (Ouch.) The doc tells Anthony he’s hot and just needs a little Botox, so Carrie asks for her own evaluation. He does think she could use “a little refresh,” meaning a mini face lift, and shows her a computer rendering of what she’d look like before and after. With a full face and neck lift, she’d be back to looking like Season 1 Carrie; as the doctor says, with the right work, “the last 15 years are gone.” Yeah, but Carrie doesn’t really want to lose the last 15 years, does she?

She tells all this to Miranda and Charlotte over a bottle of non-alcoholic bubbly in the park, but it soon goes sideways when Miranda admits to her Che fantasies — and to her dalliance in Carrie’s kitchen. Charlotte is aghast and can’t believe Miranda would have an affair, reminding her that she’s married to a man and has only been with men her whole life. (Is Charlotte voicing the objections of more than a few Sex and the City fans here or what?) “Are you gay now?” she asks Miranda, who responds: “No. I don’t know.” Charlotte declares that “you are not progressive enough for this,” which sends Miranda storming off, but Carrie stops her: “We already lost Samantha. I’m not losing anyone else… You can disagree, but you can’t leave.” Miranda softens and decides to stay, and Charlotte apologizes, with Miranda admitting she doesn’t even understand what’s happening with her right now.

Carrie heads to Seema’s family Diwali party, and Seema’s parents corner her to ask about Seema’s boyfriend Dennis… who Seema has clearly made up. Carrie plays along, and Seema later tells her it’s just easier than having them bug her about why she’s not married. She admits she’s not always happy being alone, and Carrie admits she hates her new apartment. No problem, Seema says, she’ll just sell it… and she gives Carrie a Hindu bracelet to remind her of her strength. Back in her old apartment, Carrie puts it on along with her old nameplate necklace — callback! — and puts on one of Big’s old records while Miranda DMs Che on Instagram and Charlotte puts away those dolls and helps Rock paint over her bedroom wall. Carrie decides she doesn’t need that face lift after all and walks down the stairs of her dark apartment hallway… and out into the light.