Chido Nwokocha has grown used to the animus he receives because of his character, Gary, on Tyler Perry’s Sistas. His mother on the other hand? Not so much.

“I get bombarded at the store and in my DMs and on Twitter,” Nwokocha shared on the recent installment of BET’s The Tyler Perry Show: Sistas After-Show Edition. “Y’all be calling me out my name. My mom will be like, ‘Oh my God! I don’t know why they’re so mad at you. Can you tell Mr. Perry to write you nice?’ I tell my mom it is what it is because I play a crazy character. It’s been life-changing. I appreciate everyone for tuning in. I’m living the dream right now.”

It’s a dream that has Nwokocha playing the most hated character on Sistas, thanks to his acting prowess and Perry’s pen. For instance, in the Season 3 finale, Gary ruined his ex-fiancee Andi’s post-coital bliss with her new boo Robin by deviously walking out of the bathroom of Robin’s hotel room and asking to “join them.” 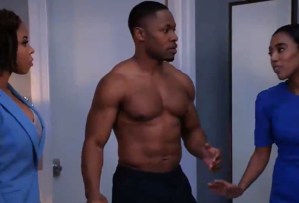 The questionable move even led some viewers to wonder if Robin and Gary have been working in cahoots against Andi this entire time. They’ll get their answer when Season 4 premieres Wednesday at 9/8c. Meanwhile, in the Season 4 teaser, Gary is shown begging for Andi’s forgiveness and trying to buy it and her love with a new car.

“There’s something wrong with Gary,” Nwokocha conceded with a laugh while adding that he still loves portraying the romantic antagonist. “It’s been incredible. When you think about your journey coming up and trying to make it as an actor, to finally get on and it blows up like this? I can’t even explain what it’s been like.”

Do you think Gary and Robin are co-conspirators and what should Andi do to fight back in Season 4 of Tyler Perry’s Sistas? Drop your thoughts and theories in the comments.