Is a second Ordinary Joe marriage in trouble? When the NBC drama returns with a new episode on Monday (at 10/9c), Nurse Joe finds himself rushing to make three dozen adaptive pants alongside Kinsley, the aide he hired to help with son Christopher’s care while his wife Jenny is pursuing her law degree out of state.

It turns out Kinsley is a bit of an entrepreneur who pre-sold the zippered garment to her caretaker friends. In the above exclusive sneak peek, she and Joe enlist his mom, Eric and Amy to help with the massive project, and Kinsley sure feels right at home with the group, sharing a musical moment and inside joke with Christopher. So how concerned should viewers be about the aide, not to mention Jenny’s colleague Barrett, both of whom have integrated themselves into Joe and Jenny’s lives? 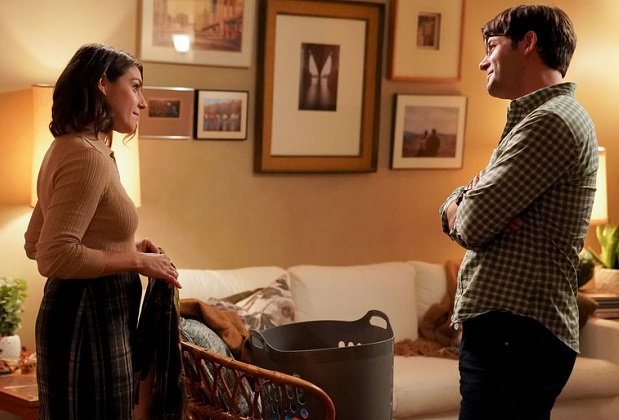 “I have to be honest, when the Kinsley character was first introduced, I was like, ‘Wait a minute, is this going somewhere? Like what’s happening with Nurse Joe and Kinsley?'” star James Wolk admits.

As for Barrett, “we’ve seen how he interacts with Jenny and makes her feel a certain way and what that means,” Wolk says. “I always looked at the Barrett/Jenny thing like I didn’t necessarily think she was interested in him. I always just felt like she was interested in the idea of him. But yet, as we get closer to these last few episodes, you definitely see something start to happen there.”

Teases Wolk: “All I can tell you is that they do a great job of taking [Joe and Jenny] and putting them in uncomfortable situations that are going to force them to test how strong their marriage is.”

Even though the two love each other, “what’s cool about the coming episodes for Jenny and Joe and the nurse world is we get to see them experience who they are without the other person around,” Wolk adds. “And then we’ll go on that journey with them of like, ‘OK, who am I without this person? What does that mean about the way I feel about this person?'” 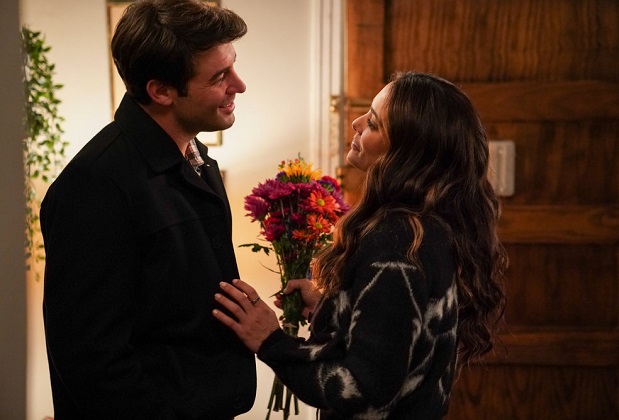 While Nurse Joe navigates his long-distance marriage, Cop Joe’s romance with Amy is evolving at a quick pace after he declared his love for her before racing into a burning building. (You didn’t really think he would perish, did you?)

“He’s never met anyone like Amy,” Wolk says. “He has a real love for Amy. And he’s also never been in a position where he wanted to make such a declaration. So it’s a huge step for him. But she’s been hurt. She’s opened herself up a few times, and she’s been burned. So she’s a much more closed off person in this world to Joe.”

Wolk loves the juxtaposition of this Joe and Amy to the music world’s married ones, who are in a much more settled and committed place. In the cop world, however, “you have this kind of young love, and we’re going to see what that means for them,” the actor shares. “He’s going to meet her parents. There’s a lot of really interesting things coming up that we’re going to see between the two of them.” 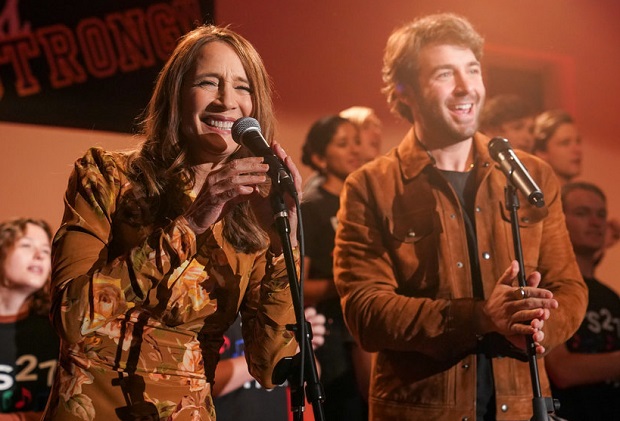 As for Music Joe, Wolk hints at “a huge moment” that will shape “both the good and the bad that come out of” the character over the next four episodes.

Press PLAY above to watch the sneak peek, then hit the comments with your thoughts on the many Joes’ timelines!