It’s been a bumpy three decades for The Shrink Next Door‘s Marty Markowitz.

As a result of the emotional warfare he suffered at the hands of Dr. Ike, Marty feels more alone than ever. He’s completely separated from his family, and has few connections to the outside world. But in the series finale of the Apple TV+ minseries (now streaming), the former patient finally tries to reclaim his life and fight back against the predatory doctor who took everything from him. How does it all end up? Read on for a recap.

In a flashback, it’s 1982 as Marty picks up Phyllis and her kids after she discovers her husband’s been cheating. The family is torn apart, but it’s Uncle Marty to the rescue, and he’s able to cheer up the mood by kickstarting a singalong to Jeffrey Osborne’s “On the Wings of Love.” As the kids come around, Phyllis lovingly looks over at him and touches his arm.

In 2010, Marty screens multiple calls from Ike about continuing therapy. While he’s out to lunch with Bruce, we learn it’s been 27 years since he spoke to his sister, and it’s very apparent that Marty is desperate for friendship and connection.

Marty finally breaks down and calls Phyllis, but gives a fake name. After she states that “Marty’s not going to get a drop of my blood” (or a kidney, for that matter), he hangs up. Meanwhile, Ike calls again, prompting Marty to finally show his face at Ike’s office. “You found your voice! Your strength!,” Ike tells him. Doc says he wants to go back to the way it was before, when they were just a therapist and a patient, but then has the audacity to ask his patient to be his Best Man at his vow-renewal ceremony. (Cringe.) Marty reluctantly agrees.

Later, Marty meets with his niece Nancy. He tells her he misses her family, but her demeanor quickly turns icy. She was expecting an apology, and when he doesn’t open with one, she hightails it outta there.

Ike tells Bonnie that they should renew their wedding vows (wow), and Bonnie isn’t into it. But when Ike brings up Marty, she tells him maybe he should just walk away. Some relationships just run their course, she says, and whatever Ike is doing is not normal. After some badgering, she (also reluctantly) agrees to the ceremony.

Marty tries to track down Hannah at the frame shop, wondering why she didn’t return his calls after their date. He learns that Dr. Ike “gave her a whole spiel,” destroying the relationship before it could fully form. Marty then leaves Ike a voicemail backing out of the Best Man gig.

As he’s changing the locks on the Hamptons home, Marty hears a car squealing up the driveway. It’s Phyllis, and she’s pissed. “You are dead to me, and I can’t have you resurrecting yourself to my children, do you hear me?” she screams. She never wants to hear from him again, but since she has to pee, she asks to use the bathroom.

Phyllis notices the tree is gone, which sparks her curiosity. Marty tells her about Ike and the parties, and the merging of the two properties. She questions the new photos on the wall, all of which are of Ike’s friends. Once she sees the painting of Ike and Bonnie in the master bedroom, she’s mortified. “What the f–k did he do to you?” she asks with sadness in her eyes. Marty says he wants to be her brother again, and he’s going to erase Ike from his mind, once and for all. With that, they burn tons of Ike’s belongings in a bonfire.

As they’re beginning to reconnect, Ike shows up wanting to talk things over. When Ike realizes his manuscripts are gone, he freaks out, causing Marty to throw them in the fire. Then, Ike tries to gaslight his patient once again, telling him that Phyllis is toxic (as she’s standing right there!). Marty asks Ike to leave, but when the doctor makes a run for the koi pond, Marty lets loose and pushes him to the ground. “You took everything from me!,” he screams, before telling the doctor that it’s over. “You are nothing without me,” Ike fires back. Meanwhile, Phyllis smashes what she thinks is Ike’s car with a croquet mallet. Whoops, sorry Marty! 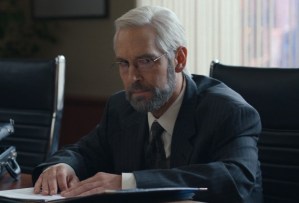 One year later, a new tree has been planted, and Marty has finally met Phyllis’ grandkids. Marty and Phyllis have squashed their beef, though both seem melancholy to have lost so much time.

At a deposition, Ike tries to defend his actions to a table of lawyers. Marty is suing the crooked doctor; however, Ike remains resolute that he didn’t do anything wrong. “I gave everything to him,” he says. “The allegations that he has made against me are false and cruel.”

Afterward, Ike wants to reminisce, but Marty’s over it. Marty asks him if there’s anything he wants to say to him about those 27 years. “I forgive you,” Ike says. “How could I not? I know you’re in pain… I can help you! Let me help you!” Marty says he feels nothing at all. “I hope you find happiness, Dr. Ike. I don’t think you will, but I hope that you do,” he says. “But I’m afraid to say… we’re out of time.”

With that, Marty bids him farewell and walks away.

At the very end, we learn via text that Marty paid Ike $3.2 million throughout the years. The doctor’s license was finally revoked in 2021, 10 years after Marty lodged his complaint.

So how did the Shrink finale fare? Grade it (and the series) below, then sound off by dropping some comments.