On Fox’s Our Kind of People, Teddy and Raymond stay beefing.

As fans of the drama know, Teddy is Leah’s father, and Raymond is her husband. But because money and power matter more than love on this soapy series, Teddy is far too comfortable trying to usurp Raymond for his family’s business, Darmon Foods. (Our Kind of People returns Tuesday, Jan. 11 at 9/8c.)

In the fall finale, for instance, Teddy attempted to buy up the company’s shares from Jack, but Raymond’s mother Olivia, um, eliminated the “Jack problem” by accidentally killing him. Even before fortune turned in Raymond’s favor, he had to chin check Teddy for loudly making a drink while he was trying to work.

Teddy smugly said he would have controlling interest in the company by the end of the week and then asked Raymond what he would have. And Raymond quickly retorted that he’d still have his youth.

“You’ve been gunning for me, and I’ve had a lot of time to actually contemplate why,” Raymond said. “And the bottom line is, I think you’re jealous that I have the rest of my life ahead of me. Time is no longer on your side. It’s on mine. There’s nothing you can do about that. Enjoy your nightcap.” 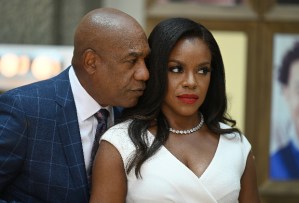 Joe Morton, who stars as Teddy, says when the contentious scene ended, he and Morris Chestnut, who plays Raymond, were back to being fast friends. After all, Morton and Chestnut worked alongside one another in the 1994 rom-com The Inkwell, which also focused on the well-to-do Black community within Martha’s Vineyard. Fascinatingly enough, Wilmington, North Carolina doubled as the Massachusetts town on both Our Kind of People and The Inkwell.

“Morris is great,” Morton tells TVLine glowingly. “He’s very focused and very clear, and on top of that, he’s a nice guy. It makes life very easy to work with him because you can’t help but like him. That’s what makes these snippy scenes so much fun. We’re acting like we hate each other, and nothing could be further from the truth.”

Chestnut agrees and says his reverence for Morton grew when he saw the Emmy-winning actor play Papa Pope on Scandal after having worked with him all those years ago. 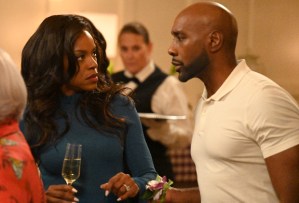 “I was really excited when I heard he was part of the project, and I was looking forward to getting some scenes with him,” Chestnut shares. “Papa Pope was an iconic role for him, and he won an Emmy for his performance. He keeps the Emmy on his shoulder to keep us all in check. No, he doesn’t do that. Joe is a very humble and respectful human being and an incredible actor who makes everyone around him that much better. I like to pick his brain when he’s on set and I can talk to him.”

As for Teddy and Raymond, Our Kind of People viewers can expect more sparks and snark, the actors say. After all, Teddy is a “Que Dog,” aka an Omega Psi Phi frat brother, and Raymond is a member of the Kappa Alpha Psi fraternity. In other words, they’ll never be friends.

“Teddy isn’t going to take his battles with Raymond, or anyone, lying down,” Morton teases. “Raymond may win this round, but there will be many rounds to come.”

Are you excited about Teddy and Raymond’s next verbal boxing match on Our Kind of People? Drop your thoughts in the comments.