As Season 2 of HBO Max’s Love Life got underway, Marcus Watkins comfortably navigated the world projecting the facade of a cool, laid-back dude. And then a funny thing happened. He got to know a woman named Mia, and suddenly his mask fell away.

But life’s gonna life. And at the time Marcus (played by The Good Place‘s William Jackson Harper) met Mia (2 Dope Queens‘ Jessica Williams), he was married to Emily (Utopia‘s Maya Kazan), making those sparks he shared with the attractive woman from the wedding they attended — the one who wasn’t his wife — super complicated.

Upping the ante on those aforementioned complications is the fact that Mia is Black and Emily is white. And when Marcus and Mia started texting (like, a lot), Marcus started making fun of Emily’s white fragility and ignorance when it came to Black culture. Marcus also began spending more and more time with Mia, even though he was spoken for and she had a boyfriend. When Marcus was around Mia, he could be himself and share cultural jokes and observations with her he didn’t share with his wife. And before he knew it, Marcus was having an emotional and intellectual affair. 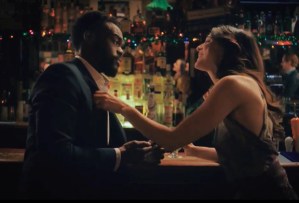 Thankfully, the writers didn’t make Emily a trope or a fool; she knew something was askew the moment she and Marcus got home from that wedding. This is why she innocently but astutely asked Marcus who the pretty woman in the red dress was that he was talking to outside.

Things got wacky at work, too, when Marcus, an editor, tried to land a young and promising writer with an edgy manuscript. The author, Trae (Love‘s Jordan Rock), was a piece of work, and upon coming to Marcus’ office he immediately began questioning the editor’s Blackness. At first, Marcus rightly dismissed Trae’s harsh criticism. But when Trae said Marcus was an Obama among white people, the “safe and cool” comparison chilled him to his core and he decided to test out what Trae said — using  Emily as his litmus test.

Marcus asked Emily who he reminded her of, and the moment his wife said the former POTUS’ name, Marcus realized there was some truth to the words Trae hurled at him. He also realized Emily that really didn’t know him at all. But who’s fault is that? 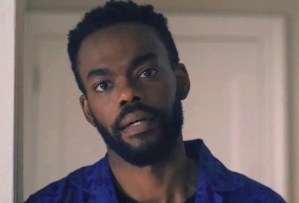 On the one hand, you could say Emily should have known which comparison would trigger Marcus’ distrust of her. On the other hand, if Marcus only presented a well-honed persona to her instead of his authentic self, how was Emily supposed to know? (Not to mention the fact that if he wanted to be with Emily, really wanted to be with her, he would’ve educated her about the Black experience, or at least his Black experience. That’s only fair, right?)

By episode’s end, Marcus nearly got physically intimate with Mia, but his conscience got the better of him. The next morning, he tried to see Mia again, but her boyfriend was back in town. Marcus went home feeling dejected, but his problems had just begun. A tearful Emily had discovered his countless text messages to Mia on his synced-up iPad, and their marriage was over.

What did you think of the Season 2 premiere of HBO Max’s Love Life? Grade the opener in our poll and drop your thoughts in the comments.