Alcohol can be quite the truth serum. Perhaps this is why Karen professed her lingering feelings for Zac on Wednesday’s Tyler Perry’s Sistas.

The whole confession took place when Karen, Andi and Danni met over Sabrina’s apartment to check on her after the bank robbery. To make things festive, Danni busted out several mini bottles of liquor she’d pocketed from the airline where she works as a gate agent.

Just as things were getting fun and buzzy, Sabrina walked in enraged that she had seen a nude, post-coital Calvin and his booty-call Peggy strutting around his and Maurice’s place because they thought they were alone.

Although Sabrina and Calvin aren’t in a committed relationship, Sabrina had just hooked up with him and felt betrayed. She stormed out and went home, and when her girlfriends asked for more details about the indecent discovery, Sabrina failed to mention Peggy is white and knew all about Sabrina, even though she didn’t know anything about her. Instead, Sabrina deflected by spilling tea about Aaron proposing to Karen. 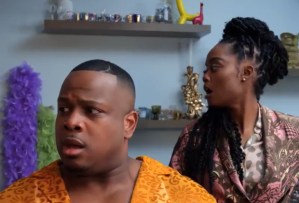 The ruse worked. Andi and Danni began asking Karen why she had turned down Aaron’s proposal, and Sabrina jokingly mentioned that Zac’s $72,000 payback check had gotten Karen all twisted up in her emotions. Karen said it was more complicated than that.

“We got history, OK?” Karen responded defensively when talking about Zac. “You can’t just wipe that away. That’s all I said. I’ve been thinking about him a lot lately.”

Andi became quiet in response, and then all eyes were on her. Danni asked point blank if Zac and Fatima were officially a couple, and Andi lied and said she didn’t know. Karen said Andi should be informed because Fatima is her “girl.” But Andi stuck to her story and said she was first and foremost Fatima’s boss.

A knock on the door saved Andi. It was Calvin, who wanted to tell Sabrina his side of things. Andi happily opened the door, and Danni and Karen mischievously urged Calvin to come inside. Calvin asked Sabrina if she could talk alone, and the tipsy friends weren’t having it. He said he had “a lady friend” over and that he thought it was cool because they’re not exclusive. 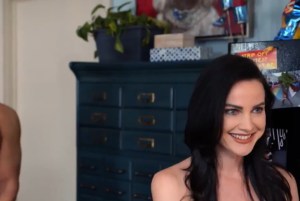 Annoyed that Danni was making fun of him and his predilection for wearing women’s panties, Calvin cursed Danni out and continued to defend himself. He said he never lied to Sabrina and she knows how much he likes her.

Calvin said he’d continue seeing whomever he wanted, and if Sabrina wanted to let her friends call the shots in her romantic relationships, that was her problem. Dude said Sabrina could come over for dinner if she wanted to talk further. But Sabrina told her friends she wasn’t going to go, and no one believed her.

Andi said she was going to talk to Gary, Danni went home to be with Preston, and Karen said she was going to call Zac, which made Andi visibly uncomfortable. Over at Danni’s place, Preston said he wasn’t sure she wanted to see him. Danni reiterated that she did want to see Preston, just not every day. Preston, who was clearly frustrated, said he wanted to have sex or “pop that WAP,” but Danni peevishly turned him down. So they talked instead. 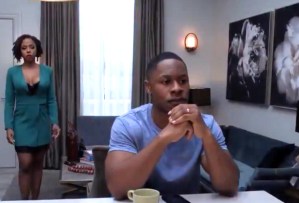 Speaking of conversations, Gary refused to talk to Andi when she got home and ignored her when she said hello. When Gary did bother to speak, he said he bought a place and would be moving out soon. Andi said it was immature to move out without saying goodbye, and she called him an a–hole.

She said his therapist was a quack and so were her methods and the therapist wants to sleep with him. Ever the attorney, Andi then asked Gary to leave her key on the table so she could have the locks changed — again. Gary said if he left this time, he wasn’t going to come back, and Andi said that suited her just fine. Shocked that Andi was actually standing up for herself, a dejected Gary called Andi coldhearted and left.

Meanwhile, Karen’s call to Zac went straight to voicemail because he was spending sexy time with his new boo Fatima, who was dressed in racy purple lingerie. Zac gave her a bouquet of white roses and told her his good news: He got the house.

What do you think of Karen’s plans to reunite with Zac instead of moving forward with Aaron on Tyler Perry’s Sistas? Drop your thoughts in the comments.