Once My Name‘s Jiwoo figured out who her father’s murderer was, there was no turning back in the finale of Netflix’s edgy and vengeance-packed Korean drama.

The question was: How would Jiwoo get to Mujin to exact her revenge if the police had her locked up  behind bars? The answer arrived in the form of Mujin’s attorney, who showed up to the police station and demanded that Jiwoo’s injuries be treated. The police obliged and escorted Jiwoo to the hospital where Mujin had one of his lady underlings waiting to help Jiwoo escape.

Clearly, Mujin wanted Jiwoo to come for him so he could kill her (or be killed), and after she picked the lock on her handcuffs Jiwoo headed straight for him. Her former partner, Det. Pildo, had other plans and followed her to the parking garage to put an end to her quest. Captain Cha had told him who Jiwoo really was and why she was out for blood, but because Pildo had developed feelings for Jiwoo, all he wanted to do was protect her.

Pildo’s hot pursuit paid off when Mujin’s men attacked Jiwoo in the garage and he and Jiwoo had to fight them off. The fight would’ve been less complicated if Pildo hadn’t handcuffed himself to Jiwoo, but where’s the fun in that? The two narrowly escaped with their lives and Pildo drove them to a secluded beach house where they started talking… and then kissing… and then making love. While enjoying their pillow talk, Pildo convinced Jiwoo to turn herself in, to end the cycle of blood and retribution — and Jiwoo agreed. 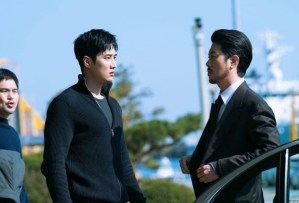 The next morning, the lovebirds headed out to the police station but didn’t make it. Mujin pulled up on a motorcycle and shot Pildo in the head, so Jiwoo could watch him die. A heartbroken and traumatized Jiwoo got out of the car just before officers arrived and headed for Mujin’s hideout to end the devastation and murders. But killing Mujin would be far from easy and Jiwoo, who was packing a service revolver with a single/symbolic bullet, had to first fight off Mujin’s multitude of minions. So. Much. Blood.

An understandably exhausted Jiwoo had to use her one bullet to kill the final henchman standing between her and Mujin, because dude bested her with every kick and punch. (He looked so harmless, too.) By the time she reached Mujin’s office, old boy was like, “You look tired.” He then started insulting her dad, whom he killed, by calling him “weak prey.” Come on, man! The woman was pointing an unloaded gun at you. Why shoot her down with cheap shots? 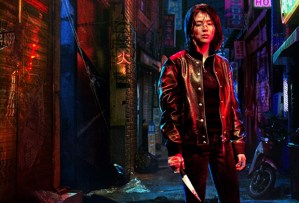 Jiwoo retaliated by ripping the photo of her dad and Mujin in two and keeping the half with her dad. She told Mujin she didn’t want to become a monster like him, and Mujin said she already was. A teary Jiwoo disagreed and said because she didn’t kill Mujin sooner, she had lost the one person who loved and understood her  — Pildo, whom she also loved in return. She said she would become a monster for the night so she could watch Mujin take his last breath.

The fight began and Mujin got the upper hand without even unbuttoning his suit jacket. (He stabbed her and cut her, and the jacket stayed closed.) But cockiness is a funny thing, and Mujin’s arrogance gave Jiwoo the fuel she needed to slice his legs with her knife until that blazer of his was wide open and flapping in the wind. The villainous crime boss kept fighting back and talking smack, and Jiwoo appeared to be defeated until she twisted his wrist and impaled him with his own knife.

After stabbing Mujin again and watching him die, Jiwoo limped away bloody and near death, but somehow she lived. When was all said and done, she recovered, dyed her hair red, and put flowers on her dad and Pildo’s graves — a monster no more.

What did you think of the My Name finale? Grade the series in our poll and drop your thoughts in the comments.