Declaring “Enough is enough,” former Batwoman star Ruby Rose has come forth with a new wave of allegations about the circumstances leading to her exit from the Warner Bros. TV series — while also insisting she didn’t “quit” but was forced out.

In a series of Instagram Stories posted early Wednesday morning, Rose led off by tagging Batwoman showrunner Caroline Dries plus exec producers Greg Berlanti and Sarah Schechter, saying, “I will come for you so what happened to me never happens to another person again. And so I can finally take back my life and the truth. Shame on you.”

Rose then named former WBTV chairman Peter Roth in her Stories, accusing him of hiring a private investigator to follow her — presumably to independently assess the extent of the injuries she allegedly sustained on-set — and then recalling the PI when the exec’s preferred narrative was not supported. (Rose had undergone surgery to fix two herniated discs that she has said “were close to severing my spinal cord.”) Rose also claimed that Roth guilted her into returning to work following said surgery after just 10 days — instead of, she suggests, taking “half a day to rewrite me out for a few weeks to heal” — or else “the whole crew and cast would be fired” because the show would shut down for good.

UPDATE: WBTV on Wednesday afternoon responded to Rose’s latest allegations, saying that the actress is engaging in “revisionist history,” and attesting that she had been fired after “multiple complainants about workplace behavior.”

♦ After asking fans to “stop asking if I will return to that awful show, I wouldn’t return for any amount of money nor if a gun were to my head,” Rose maintained that it was not her decision to part ways with the series. “I DO NOT QUIT,” she wrote. “I followed orders, and if I wanted to stay I was going to have to sign my rights away. Any threats, any bullying tactics or blackmail will not make me stand down.” (TVLine has reached out to Rose’s reps for clarification on what “rights” allegedly would have been signed away. Back in May 2020, a source told TVLine that the exit “wasn’t 100-percent her decision. It was a breakup. She wasn’t happy … so everyone decided it would be in the best interests of the show, and for all concerned, if they parted ways.”) 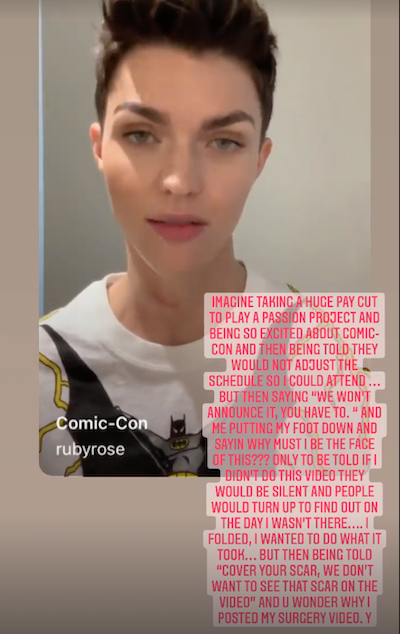 ♦ It was allegedly left to Rose to personally announce the fact that she would be missing the 2019 San Diego Comic-Con (because, she claimed, “they would not adjust the schedule so I could attend”). Otherwise, she says she was told, fans instead would show up and find her not there. In said video (screenshot at right), Rose was asked to, but did not, cover up the neck scar from her recent surgery.

♦ Rose alluded to numerous instances that would seem point to unsafe filming practices during Batwoman Season 1. In addition to the well-documented March 2020 incident in which 30-year-old production assistant Amanda Smith was left paralyzed after the bucket of a lift was accidentally lowered onto her head, Rose claimed that one crew member got “third-degree burns over his whole body,” two stunt doubles were lost to hospitalization, and she herself was “cut in the face so close to my eye in a stunt I could have been blin[ded].”

♦ Rose alleged that during one of Dries’ visits to Batwoman‘s Vancouver set, the showrunner privately agreed that her star sustained her injuries on set “yet later denied it entirely and said it happened during yoga…. I don’t do yoga.”

♦ Though she was not legally able to drive herself to set following her mobility-limiting surgery, Rose alleged that production refused to send a driver for her but instead said “get a taxi.”

♦ After admitting that she “fought people on set, yes… because I wanted safety” yet “never raised my voice on a set,” Rose alleged that co-star Dougray Scott (who played her father, Jacob Kane) “hurt a female stunt double” and “yelled like a little bitch at women and was a nightmare.” (Scott’s London-based publicist did not immediately respond to TVLine’s Wednesday-morning request for comment.)