There is nothing predictable about Hulu’s limited series Dopesick. The minute you think the drama is going to swerve right, it goes left and vice versa. Nowhere is this more evident than with Michael Keaton’s Dr. Samuel Finnix.

The widower started prescribing OxyContin for his patients because he really thought it could help with their chronic pain, especially for those who worked as coal miners. Finnix attended a pain management seminar on Purdue Pharma’s dime in Arizona, and while he was there, he met with doctors and specialists he admired and idolized. He even spoke at the seminar as an expert. By Episode 3, Finnix thought about asking out a redheaded pharma employee whom he connected with and found attractive.

In fact, he was in Washington D.C. meeting with his late wife’s sister to talk about the difficulties of moving on and dating again when he got a call from his nurse letting him know that his patient Betsy had been in a bad workplace accident. A distracted and concerned Finnix ran a stop sign and got into a car crash, and the ER doctors prescribed a high dose of Oxycontin for his fractured ribs. That’s when everything went south. 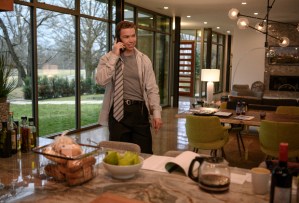 By this week’s Episode 4, the doctor’s ribs had healed, but he’d developed an opioid addiction as a side effect. At first, Finnix started cancelling his appointments with his patients, and then he grew angrier and more disheveled because of the power the drug had over him. He attacked Billy, the pharma rep who had befriended him, in a fit of rage because Finnix realized everything Billy had told him about OxyContin being addictive for less than one percent of people was a lie.

Finnix reached out to the redhead, and she told him to lose her number because he had fallen asleep during a speaking engagement she had arranged for him while high on OxyContin. Making matters worse, he wasn’t calling to apologize to the woman but to ask her if she could give him some free samples of the drug. The small-town physician naïvely tried to quit opioids cold turkey and even locked up his only bottle in a kitchen cabinet. 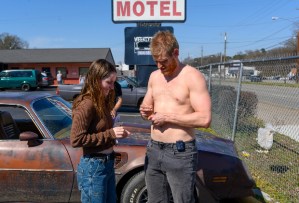 But the withdrawals (aka the dopesickness) were too insurmountable, and he later cut his hand breaking the glass on the locked cabinet door to get to the pills inside. When those pills ran out, Finnix paid a visit to a local drug dealer who had no qualms about selling OxyContin to a man the whole town had once revered. Walt the drug dealer, who had gotten the pills on a shady Florida re-up road trip with Betsy, also taught Finnix how to get higher faster by licking the coating, rubbing it off, and crushing the Oxy into a powder to snort.

That’s exactly what Finnix did, and in one of the series’ most heartbreaking moments, he got high and imagined that he was dancing with the deceased love of his life one last time. Elsewhere in the installment, Betsy’s family and friends tried to enroll her in a rehab program, and she was slowly getting better until a pill pusher sold her opioids at a Narcotics Anonymous meeting.

We also learned how Elizabeth Ann, one of Finnix’s other patients, got hooked on opioids at a party and about Richard Sackler’s unholy alliance with David Haddox, the questionable pain expert who coined the phrase “pseudo addiction” and argued that addiction doesn’t actually exist.

What did you think of Dopesick Episode 4, and is there hope for Dr. Finnix and Betsy? Drop your thoughts in the comments.