This week on DC’s Stargirl, Courtney found herself trapped in the Shadowlands — but she was not alone. What personal demons were faced in Eclipso’s birthplace, and what did it take to find a way home?

Banished to the Shadowlands at the close of her clash with Eclipso last week, Courtney came to in a black-and-white Blue Valley, where she first was astonished to run into the Zarick family — wannabe/mediocre magician Joey included! — at the local diner.  Fleeing from that discomfiting scene, Courtney exited the diner only to step into the high school hallway, where she soon enough bumped into Cindy/Shiv. The two girls started duking it out, until Cindy slashed her foe and took notice that she was bleeding. Meaning, Courtney was not yet another Eclipso-generated illusion (like the Dragon King dad she slays over again in this purgatory) but the real deal.

The next stop was Cindy’s bedroom, where Cindy explained the Shadowlands’ origin (generated by all of the evil in humanity) and how such a hell loop would gladly feed on a good girl like Stargirl’s alter ego. Undeterred by Cindy’s warning that there is no way out, Courtney left her room and stepped into… the tiny apartment where her mom Barbara raised her, alone. Thinking Courtney a babysitter, Barbara unloaded her many woes about being a single mom (with a business degree!) to a kid who worships the dad who walked out on them both. Just as Courtney gets bogged down by the guilt trip, Cindy shows up and drags her away from the gloom spiral. 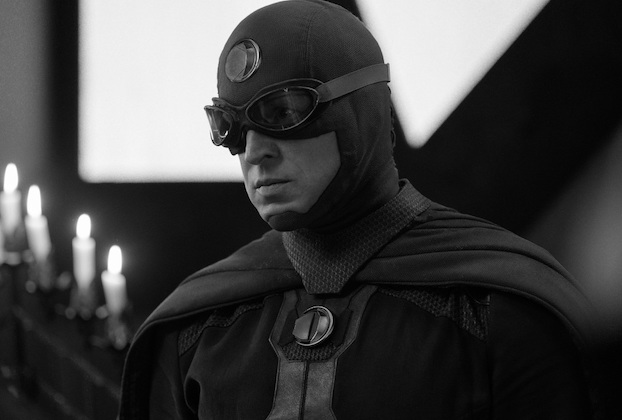 After being dealt face-off after face-off with her dad, Cindy is then dealt a new, dark hand by the Shadowlands, in the form of her mother. The mother that she killed, as  a young, experimented-upon girl. Cindy begs her mother for forgiveness and chases after her, but Courtney is not allowed to follow. Instead, Court finds herself in the true, dark, swirly Shadowlands, a void free of familiar illusions. She is pulled out of the void by the OG Dr. Mid-Nite aka Charles McNider, who brings her to the JSA bay where Stripesy kept the car. Charles hints at his own hell loop — hearing his daughter’s voice — and explains how he always felt hope was lost, until Beth Chapel rebooted his goggles and started making glitchy contact.

Meanwhile in the real world, Pat and Barbara are bereft over losing Courtney, when Beth shows up to report that Charles made contact with her and suggested how The Shade might be able to help. Pairing Richard Switf’s business card with the Green Lantern ring, Jennie is able to project a map of Blue Valley, revealing where Swift is. Pat and Barbara find him at the moviehouse, where he is still a bit worse for the wear, reassembled black diamond or not. Still, Pat and Barbara — armed with the fresh intel from a very much alive Charles McNider — are able to compel him to help out, so he holds his hand up to the movie screen and labors to transform it into a sort of portal. They can see Barbara and McNider in the repair bay and signal them to pass through… but Courtney insists on going back for Cindy, while we at home tear up a bit at the gesture.

Thing is, the doorways are unpredictable in the Shadowlands, so it takes Court a few tries to get to Cindy. First, she has a couple of run-ins with Bruce/Eclipso, who taunts her with the illusion of a sad Yolanda (allegedly ruing the day she met Courtney) and Rick as a “caged monster,” and then goads her into embracing her hate for him, by likening it to her lingering absentee daddy issues. Courtney finally admits that she hates Eclipso, at which point she finds herself in Dragon King’s lab, right as he is about to perform a final procedure on his daughter.

Court is wary of a fight without her staff, but McNider arrives and counsels her to acknowledge Dragon King as an illusion, at which point the sword-swinging baddie fades away. Cindy, though, is still distraught over a nearby vision of her mother and her younger self — especially when it turns into a murder scene, with Mom in a pool of blood. Courtney pulls her frenemy out of this new hell loop, and they all make a run for the portal. And as Pat and Barbara look on inside the moviehouse, Courtney… followed by McNider… and then, finally, Cindy… all pass through safely, into the real world.

The Shade, though, has given it all he’s got. And before taking what will be his final breaths, he politely (as ever) asks Barbara to let people know that he died doing something good. Cindy them aims to rally the troops, asking from the stage, “So, who wants to kill Eclipso?”

What did you think of “Summer School: Chapter Eleven”?