Zac had made a lot of money on that stock tip he received and was dressed nicely and saying all the right things to Fatima as he promised her fidelity and stability. But money is a tricky thing, and it can sometimes make matters of the heart complicated, as fans will learn when the highly rated BET drama returns for Season 3B next Wednesday, Oct. 13 at 9/8c.

In the latest Sistas promo, for instance, Fatima can be seen proudly telling Zac, “This is your house, and this is your money.” Crystal Hayslett, who plays Fatima, says her character loves Zac (Devale Ellis), but she’s just trying to establish boundaries so that Zac doesn’t think her love and affection are for sale.

“Fatima wears her heart on her sleeve,” Hayslett recently told fans during a Facebook Live chat. “Even though she had that outer shell where she was trying to be tough, because someone had hurt her before, she’s not. But once you really find somebody that you love, things change. Fatima is starting to let her guard down when it comes to Zac.”

Hayslett said she hopes “Zatima” (the nickname Zac coined for them) can remain as one, despite outside influences like his lingering ex-girlfriend Karen (Ebony Obsidian) or Zac’s financial windfall. 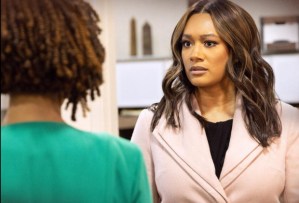 “Right now, we’re rocking,” Hayslett revealed about the fan-favorite couple. “We gon’ see if they stay together.”

But Fatima isn’t just focused on her own love life. She’s also poking her nose in Andi (KJ Smith) and Gary’s (Chido Nwokocha) nightmare of a relationship and trying to get all the hot tea.

Fatima especially feels this way because she wants Andi to end up with their coworker Robin (Austin Scott) and not Gary. “Fatima has a tendency to pry a little bit,” Hayslett concluded with a chuckle.

Are you worried about “Zatima” on Tyler Perry’s Sistas? Or do you think they will be fine? Drop your thoughts in the comments.