Disney Channel’s original 1997 version of Under Wraps had many of the elements family comedies need: three cute and precocious leads, a fun-loving mummy and plenty of funny moments. There was just one thing missing — diversity.

All of the movie’s leading characters were white. But the revamped Under Wraps, which premieres tonight at 8/7c on the Disney Channel, shakes all of that up with an inclusive cast that incorporates more people of color. Two roles that were initially played by men are now filled by women, and one lead has same-sex parents.

“Diversity is essential,” director Alex Zamm tells TVLine. “It goes to the core of the movie. Harold the mummy represents open-mindedness and how people respond to things they think are different. It’s important that we live in a world and we breed a world where people look at things with an open mind and heart. The kids thought he was a monster, but Harold was a friend.”

The Social Dilemma‘s Sophia Hammons, who costars as Amy, agrees. Amy, along with besties Marshall (Malachi Barton) and Gilbert (Sydney to the Max‘s Christian J. Simon), stumbles upon a stolen, reanimated mummy (Phil Wright), whom Marshall names Harold after his grandpa. Harold teaches the preteens to loosen up, and they teach him about smart phones and Roombas as they fight to avoid the movie’s ever-looming bad guys. 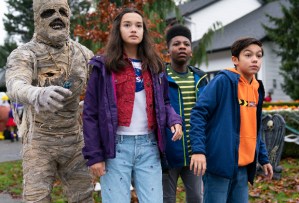 “The whole point of a remake is to have something new,” Hammons says. “We still stayed true to the heart of the story, but as an actor and a young woman of color, it’s really important to be in movies that show that. I feel great to be a part of it.”

Simon, whose character Gilbert eventually overcomes his fears, says representation makes him feel encouraged. “I hope that I’m inspiring young Black kids who watch this, to go out and do their thing,” he says. He even adds that his high-top fade created some hair-raising challenges when he donned a gnome hat and costume in the movie. “And I had to run in it,” the actor confesses with a laugh.

As for this version of Harold the mummy, he has sweet dance moves that the O.G. one, played by SpongeBob SquarePants‘ Bill Fagerbakke, didn’t.

“Shout-out to Bill, who did the first movie. He’s a complete legend,” adds Wright, an actor and choreographer who came up with Harold’s new boogie. “Those were big shoes to fill, and obviously there were nerves that come with that. But I did bring my own flare and moves to it. Harold wasn’t dancing like that in 1997.” 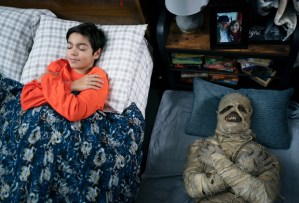 Barton also brought his own personal touches to the role. There is a photo of Marshall and his grandfather on his nightstand, but it’s actually Barton and his real great-grandfather.

“He sadly passed away two years ago,” Barton reveals. “And to be able to honor him in this movie really meant a lot to me.”