The Sharma family formally arrives in the Ton in new photos from the Season 2 premiere of Netflix’s Bridgerton.

The Netflix hit made waves over the weekend when the streamer’s “TUDUM” event released a sneak peek of Anthony Bridgerton (played by Jonathan Bailey) getting rightly razzed by Kate Sharma (Sex Education‘s Simone Ashley).

In the photo above, Lady Danbury (Adjoa Andoh) appears to be presenting the Sharmas to proper London society, including Ashley’s Kate, Terra Nova‘s Shelley Conn as Mary Sharma (an Earl’s daughter whose marriage once embroiled her family in scandal) and newcomer Charithra Chandran as Kate’s younger sister Edwina.

Kate is described as a smart, headstrong London newcomer “who suffers no fools — Anthony very much included.” Conflict arises, as fans of the books know, because Anthony is supposed to marry Edwina, but he has more chemistry with the meddlesome Kate.

Bridgerton has already been renewed for Seasons 3 and 4, and a Queen Charlotte spinoff is in the works. The prequel series will be centered on the origins of Queen Charlotte (Season 1’s Golda Rosheuvel) and executive producer Shonda Rhimes will pen it. The drama will explore the young royal’s ascension to the throne before she became wig-tastic as well as her love life in a gossipy, candy-colored world. This spinoff is especially noteworthy because the scene-stealing character was created for the series and does not actually appear in Quinn’s books. 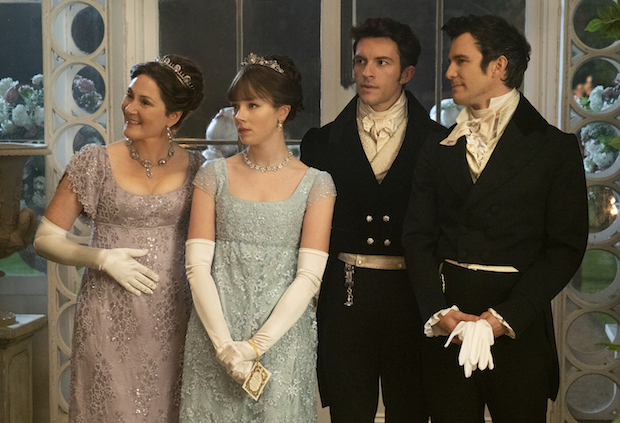