Survivor is back, and the granddaddy of reality competition series wasted zero time before going straight for the jugular. After the players learned they’d be given no food whatsoever — and that the game would be shortened to 26 days (aka Survivor on speed) — an exhausting immunity challenge sent not one but two groups to Tribal Council, thus claiming Season 41’s first pair of victims. (For a full premiere recap, click here.)

Below, TVLine talked to fallen comrades Eric Abraham and Sara Wilson (in separate conversations) Thursday to break it all down, including how this season messed with their expectations, how the “Shot in the Dark” twist can disrupt Tribal and what they could’ve done differently in hindsight.

TVLINE | What was your initial reaction when you learned the season was going to be 26 days instead of 39?
ERIC ABRAHAM | I went into the Survivor lab when I got selected. I looked at every episode of Survivor, and I was like, “I’m ready to go.” Then Jeff springs the 26 days on us, and I was like, “Survivor‘s gonna speed up a little bit!” I just did not realize how fast it was gonna go! [Laughs]
SARA WILSON | I was a little bit scared, to be honest! I knew the pace of the game was going to be really fast, and I knew that meant we’d get limited supplies. It was exciting to be part of something new, like a trailblazer.

TVLINE | This season feels so new and fresh. Which of the new rules or twists were you most surprised about?
ABRAHAM | The 26 days, and also not giving us anything to eat, because mentally and physically, you’ve got to find something and be able to sustain yourself. And coconut is not my favorite fruit! So you’ve got to get mentally readjusted to that.
WILSON | I thought the Shot in the Dark was very interesting. It really can change the way the game is played because you’re not only thinking, “Should I play this for myself?” but especially in the three-tribe setting, if someone else plays their Shot in the Dark, it can completely throw off the vote count. So I felt like it had a lot of potential to change the way the game was played. 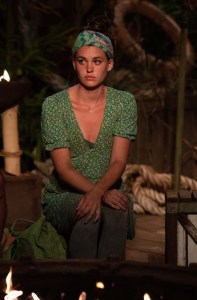 TVLINE | About that, Sara… it seemed like you were going to pull the trigger on your Shot in the Dark. Why didn’t you?
WILSON | In the moments leading up to Tribal, I was like, “I’m gonna play my Shot in the Dark,” and all of the time leading up to that I was like, “There’s no way I’m not gonna play this, and if I don’t get immunity, I’m gonna eat a fried chicken sandwich and sleep in a comfy bed.” [Laughs] I knew people had been lying to my face all day, but in that moment, I could see in Shan’s face that she was scared, and that she wanted to change [the vote] to Brad. I wasn’t one hundred percent set that JD wasn’t going to play his, because I think he knew he was on the block and he was acting a little bit paranoid.

The last thing I wanted was to have three votes go my way, and then lose my vote and [potentially] send myself home. That was my biggest fear. Honestly, after the episode, I said that it was my biggest regret, but looking back, I don’t regret not playing it. I had a read on the situation. I wasn’t blindsided, but I felt like it could have gone any way that night, and that’s why I didn’t play it.

TVLINE | Shan seemed to be in your ear trying to talk you out of it! What was your relationship with her like out there?
WILSON | We did connect. We talked a lot and have a lot in common outside of Survivor. She was very good at talking to other people and building relationships. It set off alarm bells in my head because everyone loved Shan! She and I were on the puzzle, and no one placed blame on her. It felt very clear that it was more because they just felt more connected to her. I definitely [thought], “She’s the biggest threat in this game,” but I was so scared to put her name out because she literally was like the mafia boss at camp. If I put her name out, it would have been game over for me, because anyone I said it to would have gone directly to her, and then she absolutely would not have trusted me.

TVLINE | Abraham, what was your opinion on the Shot in the Dark die? Did you consider using it that night?
ABRAHAM | Since Survivor‘s been on for 20-plus years, we have an opportunity to go back and look at challenges and say, “What would I do if this ever came back up?” but the Shot in the Dark is brand new, and that took away your vote. So it could work? It might work? But who wants to take that chance? Not at the very first Tribal. I felt very comfortable, so I [figured] I would just save it for later. 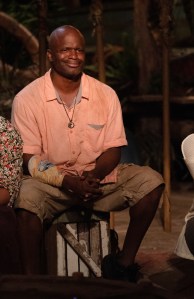 TVLINE | Did you have any initial concerns when you saw the tribes were going to be small, at just six castaways each?
ABRAHAM | Fear. I was like, “Wait a minute, what happened to just the two tribes?” My anticipation was two tribes. I could kind of lay back, get a view of the landscape. Figure out who’s who. With only six people, it started immediately. As soon as we were on the boat, it was time to go to work. You and I wouldn’t be talking today if it was 10 [castaways per tribe].

TVLINE | On a scale of 1-10, how blindsided were you, Abraham, and did you have any inkling that it might be you that night?
ABRAHAM | It was a 10. I had a solid philosophy that if you couldn’t beat me in strength, you would use me to shield yourself. So I said, “You know what? I’ve got a plan that’s gonna work both ways.” I targeted somebody that I thought was a weaker player. I was like, “This is great. This is gonna work out for me!”… until Jeff read my name! [Laughs]

TVLINE | Is there anything you wish you’d done differently?
ABRAHAM | No, I enjoyed the experience. The only thing that I probably would have changed if I had to change — and it probably wouldn’t have worked — [would’ve been to] just let other people guide me, but it still could have gone another way. You just never know. You can’t second-guess yourself on Survivor when you have just a short amount of time to react to everything. And on top of that, we don’t have food. We don’t have any rice. I was looking forward to rice, too!
WILSON | On Day 1, Shan and Ricard approached me, and they were like, “Oh, we’re going to be a tight three,” and I was very set on not overplaying. I was like, “Sick, I have numbers.” Day 2, I decided to not trust them, because I saw how good they were with other people. Then I was like, “OK, let’s not focus on trying to be under the radar and going with the numbers. Let’s focus on building your other relationships.” That is definitely a regret of mine. I was truly focused on underplaying, and I didn’t play enough in terms of connecting with people.

TVLINE | Any last words?
ABRAHAM | I’ll see you on a season of Survivor down the road! And the reason why I got voted out first was so you all could get a little preview of what I can bring to the table. I look forward to being back again!
WILSON | The episode did make it look like I didn’t play my Shot in the Dark because Shan told me not to, but one hundred percent, that wasn’t what it was. I just really didn’t want to get voted out. I feel like I played the game with a lot of agency, and I really fought for it. I wouldn’t ever let someone else dictate the way I played. I did it on my own.