We may have reached peak wokeness long ago, but that doesn’t stop B.J. Novak from taking aim.

In his new anthology series The Premise (now streaming on FX on Hulu with its first two episodes), the creator/executive producer weaponizes comedy to jab some of modern society’s biggest issues.

In the premiere, a white, woke twentysomething (played by The Politician‘s Ben Platt) tries to be an ally after discovering video evidence of a police incident that could possibly free a Black man. Only problem is: It’s in the background of his embarrassing sex tape. Here’s a full recap of what went down in “Social Justice Sex Tape.”

Eve Stone (Dickinson‘s Ayo Edebiri) is a savvy, young lawyer looking for a case to call her own. She delivers her winning pick to her mentor and boss, Rayna Bradshaw (black-ish‘s Tracee Ellis Ross), in which a young Black man named Darren Williams (Superior Donuts‘ Jermaine Fowler) was arrested and charged with aggravated assault against a police officer, following an incident in Brooklyn. Of course, the cops’ body cams were off (how convenient!). Soon after, revealing footage is sent to Eve’s inbox that proves Darren’s innocence. That evidence just so happens to be a sex tape.

The man who submitted the tape, Ethan Streiber (Platt), arrives to the law firm to share his eyeroll-inducing history of wokeness, which does, yes, include trying to get Darren exonerated. The lawyers tell him they need to watch the video in full, which includes the dude’s full moon. As they watch him plow his girlfriend on film, the lawyers clearly see the police officer tripping over a curb. Darren is innocent!

Closer to the court date, Ethan gets cold feet. “Do we even really trust the legal system in this messed-up, racist country?” he asks. With a little massaging and a lyric from Hamilton, his nerves are calmed. 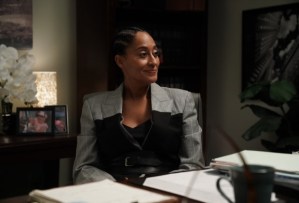 Ethan squirms in court, as the prosecutor mentions picking the clip apart “frame by frame.” Eve then tells the jury they’re about to see something truly disgusting: injustice. (Well, and also Ethan’s junk.) The court starts criticizing Ethan’s looks, scrotum included, and also his prowess (or lack thereof) in the sack. The whole ordeal is savage. And hilarious. For us. The prosecution even contends that the girl in the video is far too hot for him, so the clip must be a deep-fake!

The sex tape eventually leaks to the world, drawing attention from every a-hole on social media. It even becomes fodder for Desus & Mero!

Eve brings Ethan to the stand, and asks if he actually has any Black friends. He doesn’t. Ethan rattles off about “posting the black square” and “deleting the black square,” and goes on a tangent about how the justice system and the social justice system are both deeply effed up. “Literally nothing is ever enough, and everyone on all sides is just destroying me to show how good they are!” He concludes: “I quit. It’s all over. F–k this court, f–k this system and f–k this woke bulls–t!” Hmm, he seems to be learning something…

Yes, homeboy blows a gasket. And while Ethan’s life may be more or less over, in the end, Darren is found not guilty. In a post-court speech to the press, Darren thanks everyone — lawyers, jury, the stenographer, bailiff — but not poor Ethan.

“You said I’d be a hero for this,” Ethan says to Eve with sad eyes. She replies, “I didn’t say you’d look like one.”

How’d Novak’s anthology fare so far? Grade The Premise premiere below, then drop some comments!